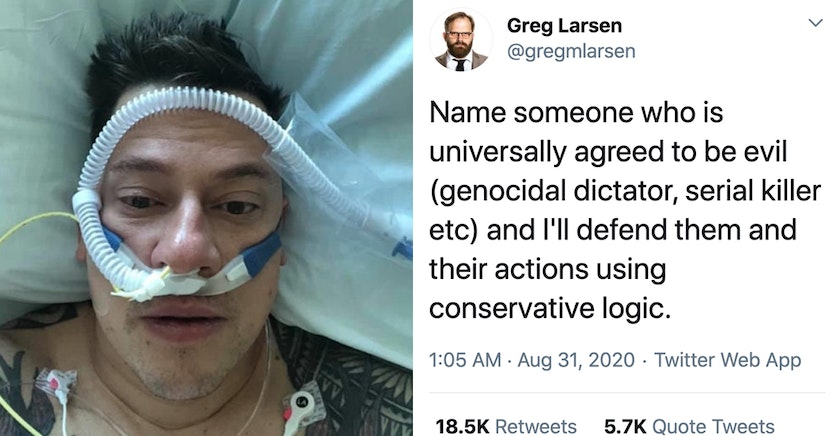 We collected our five best stories of the week, just in case you missed out.

5. Woman Teaches Maskless Kids A Lesson By Pretending To Get News Of Positive COVID-19 Test

A TikTok video has gone viral for demonstrating an easy and unobtrusive way to convince people to wear masks in public spaces. The video, originally posted by TikTok user Bruna C, shows a pair of maskless young people on an elevator as she pretends to get a call from someone about something being “positive.” Read More >>

A Facebook post by an anti-mask individual named Ben Barber has gone viral for putting a new twist on the “anti-masker gets COVID-19” story. Instead of learning his lesson and asking people to take the pandemic seriously and wear masks after contracting the virus and very nearly dying from the disease, he wrote that he will “stand by” his opinion that the whole thing is no big deal. Read More >>

So many scientists, healthcare professionals, and even regular people have posted videos this year trying to prove that masks actually do work to prevent the spread of coronavirus. Despite overwhelming evidence that they do, anti-maskers still refuse to believe that masks do anything at all, so it was inevitable that we would eventually see a viral video of one trying to prove as much. Read More >>

2. Former NFL Star Brandon Marshall Had Cops Called On Him While Trying To Move Into Affluent Community

Former NFL star Brandon Marshall shared a video to Instagram last week after having the police called on him for trying to move into his new house. Read More >>

Many conservatives are quick to twist anything around to fit their logic. It often sounds ridiculous to the rest of us, but if you jump through enough hoops, you can make anything sound convincing to people who are already primed to believe everything you say.

Comedian Greg Larsen decided to put this theory to the test, asking people on Twitter to “name someone who is universally agreed to be evil (genocidal dictator, serial killer etc)” so he could “defend them and their actions using conservative logic.” Read More >>

Here are our top 5 stories from last week, just in case you’ve been living under a rock.