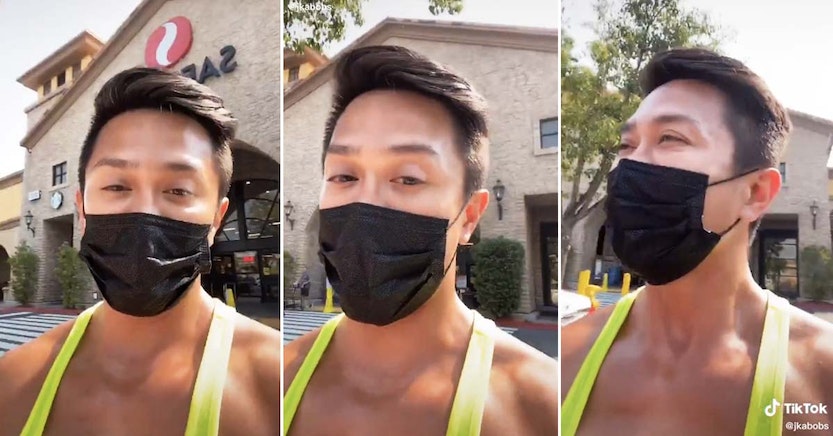 The war raging against responsible mask-wearing to prevent the spread and transmission of coronavirus is currently frothing over in many parts of the country. In addition to people claiming phony medical and religious exemptions, you’ve got some flipping out on flight attendants just for trying to do their jobs, or mothers even bragging about punishing their children for literally adhering to the rules.

But if common sense won’t get through to these people, then it appears we might just have to use reverse psychology to encourage people to wear masks, by using their toxic masculinity against them.

Take, for example, popular TikTok user Joven Calloway (@jkabobs) who recently went viral after he explained how he tricked one non-mask-wearing culprit into putting on his dang mask. As Calloway explains in the video, which has been viewed over seven million times, he had just come from the grocery store where he encountered the guy not wearing his mask.

“So I walked up to him and I said, ‘Hey, are you coming out tonight?'” Calloway explains in the 40-second video. “And he said, ‘No, what are you talking about?’ And I was like, ‘Are you coming to The Hole tonight?’ And he was like, ‘I don’t know what you’re talking about.'”

“And I was like, ‘Oh—you’re not—OK I get it, sorry. It’s just like, I’m gay and in our community, we don’t wear masks properly to let others know that we’re down to hookup.'”

“And he put his mask on!” Calloway concludes. “That’s how we win this game, guys. We gotta use the toxic masculinity against them.”

Calloway’s video also made it to Twitter, where others celebrated his ingenuity with GIFs, memes, and words of encouragement.

It is how we get dudebros to wear masks.

This guy is my hero 😍 https://t.co/eKWbgInliy

— Post-truth politics IS killing us all. Antifa Genl (@populistmorons) September 11, 2020

As they say, not all heroes wear capes—but all heroes most certainly do wear masks, and use powers of persuasion to encourage others to do the same.