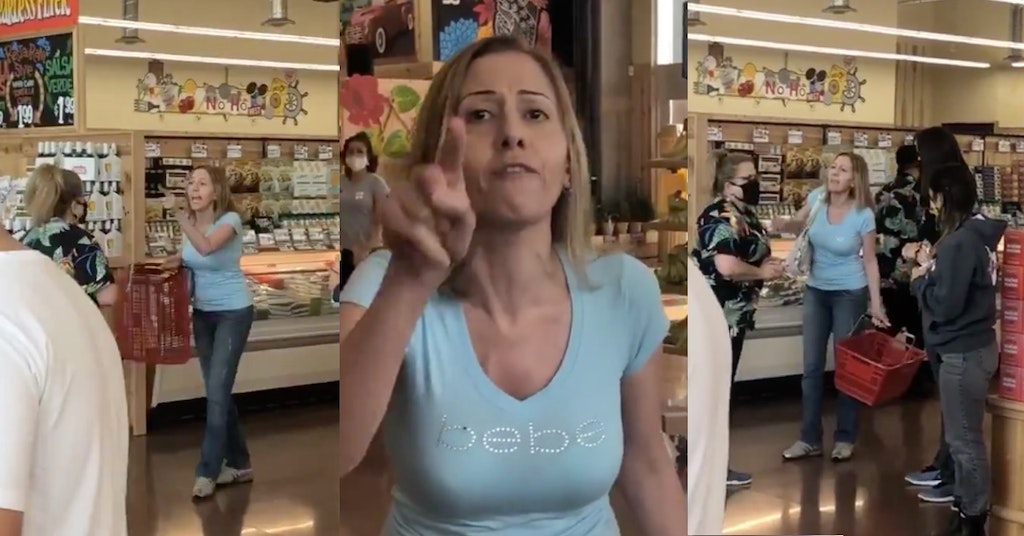 The opening of a brand new Trader Joe’s grocery store chain in Los Angeles took a turn after a woman was caught going on an angry rant after being asked to wear a mask.

Several videos were taken of the incident and shared on Twitter by @ItsRellzWorld. In the first, the woman is already in the middle of screaming at employees, which the man who recorded the videos says came after someone asked her to leave for not wearing a mask.

“Y’all, Karen is showing out in Trader Joe’s,” he says. “She does not have on a mask, and somebody said ‘Fuck you, leave,’ and she is having it out.”

Subsequent videos show her escalating the situation as employees appear to repeatedly ask her to leave.

“You fucking pigs!” she screams, slamming her empty shopping basket down. “You’re fucking Democratic pigs, all of you!”

Speaking directly to the camera, she continues to scream, claiming that she has a breathing problem and her doctor “won’t let” her wear a mask.

“So anyone harassing me to wear a mask, you guys are violating federal law! Do you get that? Get that on camera!”

The claim of a “medical exemption” to wearing a mask has been popularized among anti-maskers lately.

Websites pushing fake “face mask exempt” cards for folks to print out and hand to store managers in order to threaten a lawsuit have been popping up over the past couple months.

While many of these cards, and many of the people rushing into stores refusing to wear a mask, cite the Americans with Disabilities Act as why they should be allowed to shop without a small piece of cloth that would help prevent others from getting sick, folks have often stepped in to correct their misconception.

But people are questioning this woman’s claim to a “medical exemption” for a number of reasons.

Some folks who claimed to be at Trader Joe’s when this Karen went off said it seemed as though she was looking for a fight.

While some folks said they saw the woman wearing a mask waiting in line to get into the store, and that she subsequently took it off once inside, one account in particular added that she “walked around with a basket, but not putting anything into it.”

“Instead she was roaming the aisles and getting up in people’s faces, getting as close as possible, waiting for someone to inevitably tell her to put her mask back on,” the post reads. “And when a dude finally did — which didn’t take long I’m guessing, because she was being super aggressive — she lost it.”

The overall mood with this woman online was just pure frustration.

Masks are meant to keep others protected from the wearer, in case they have COVID-19 and don’t know it. When people refuse to wear masks, it often makes others around them, who are being conscious of everyone else, feel unsafe.

Plus there’s the whole thing where wearing a mask outside of one’s home is currently a requirement in California, where the Trader Joe’s incident took place.

Who knows if this Karen was eventually able to do her grocery shopping in one of those silly stores prohibiting people who ARE wearing masks from entering — or if she was actually even looking to buy groceries at all, when it comes down to it. But if she was looking to pick a fight and get ridiculed online for her selfishness, then she certainly had a successful day out on the town.