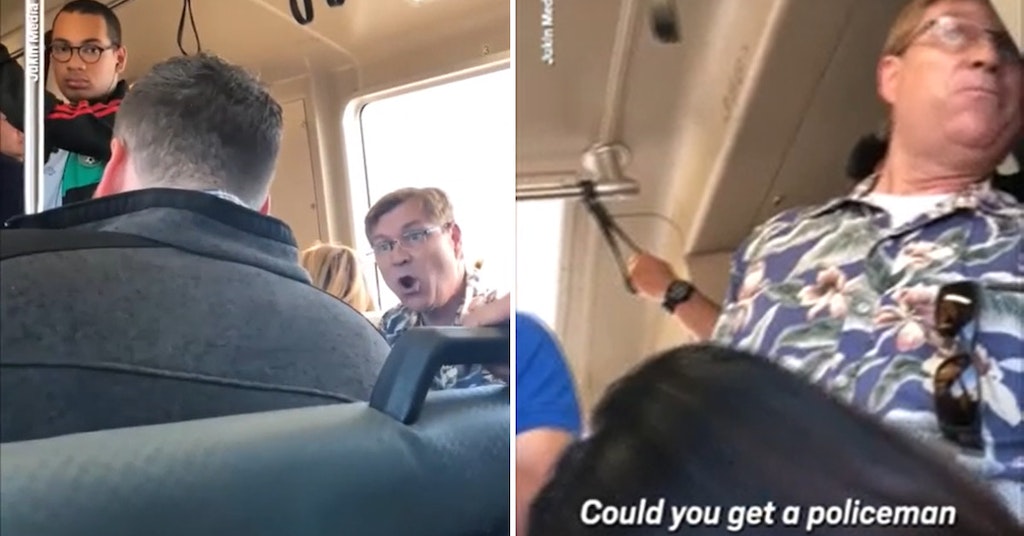 Man Calls Train Police On Someone For Eating A Burrito On Board, Becomes Reddit Famous

A San Francisco area man has gone viral for loudly complaining and then calling the train cops on another guy because he was eating a burrito in a car where it said eating wasn’t allowed. Someone got the incident on film and posted it to Reddit’s “Public Freakout” forum, and the video is now spreading fast as people wonder what kind of person you’d have to be to call the police about an in-progress burrito consumption.

“You can’t wait?” the man asks the burrito eater. “The sign says no eating and drinking. You don’t get it? You don’t get it. You must be stupid. I’ve seen people like you on TV.”

However, this guy was so upset about the breaking of the no food rule, he got up to page the train workers to summon the police to arrest this man and his burrito as other passengers can be heard cracking up over the confrontation.

“Yes please. Can we get a policeman on board? We’ve got someone dining in the first car,” he says into the intercom. The person on the other end perhaps couldn’t believe what they were hearing and seemed to ask for clarification.

He then thanks the worker, then sits back down and takes either a photo or video footage of the alleged burrito-related criminal. Some other passengers attempt to engage him about his grievance, pointing out that maybe his energy could be saved for those previously mentioned worse things that tend to happen on U.S. trains.

“Somebody doesn’t ride BART very much,” one person comments.

Others, meanwhile, can be seen clearly taking the hungry individual’s side, smiling at him and saying “cheers” and encouraging him to live his best life.

“You eat your burrito,” multiple passengers call out.

The man then gets up to get off at the next stop, and probably did not end up having to deal with the police over his rule-breaking. Passengers can be charged with a $250 fine for breaking the no food or drink rule, but enforcement is generally up to BART employees. Local reports on the incident don’t mention a police response, but reveal that the video was originally captured and posted in 2018.

Following many various reports of people becoming even nastier on public transit over the course of the pandemic, it seems that someone decided to repost to footage on Reddit, where it’s gone viral once again. If you remember hearing about “Burrito Bob” four years ago, this is the guy. And the public is still not on his side.