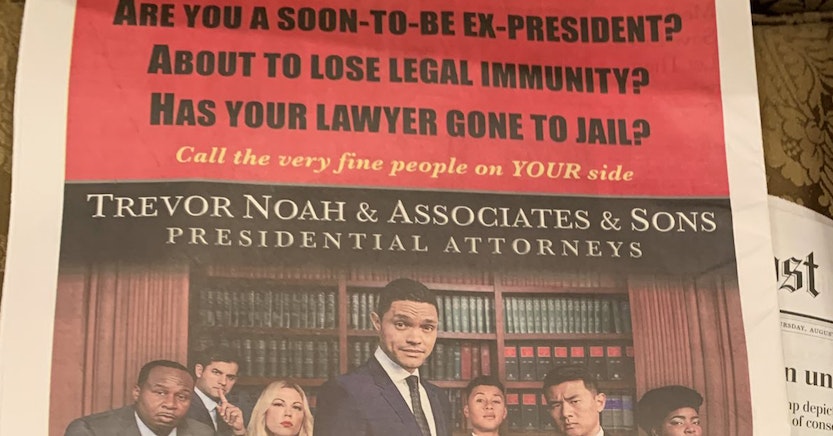 Trevor Noah is trolling President Trump in a big way: in some of the President’s favorite purveyors of “fake news” — The Washington Post, The New York Times, and The Los Angeles Times. The host of The Daily Show took out space for a hilarious ad that hits directly at Trump.

“Are you a soon-to-be-ex-President? About to lose legal immunity? Has your lawyer gone to jail? Call the very fine people on YOUR side,” says the ad, which also features a very legal-looking picture of Noah and the cast of The Daily Show.

“We can defend you against: corruption, mega-corruption, emoluments (we know what that is!), shady rich guy tax stuff, obstruction of justice (same price for multiple counts!), you told people to inject bleach for some reason, mail murder.”

Also featured on the ad? A phone number you can call that leads to an actual message:

“Hello, Mr. President. I’m Trevor Noah, managing partner of Trevor Noah and Associates and Sons. Have you ever been to Uganda, sir? It’s a beautiful country with a strong goat-based economy. And most important, it does not extradite to the United States. At any time on or before January 20th, 2021, I can transport you and any members of your family you actually like to Uganda. I can provide the service for, I don’t know, $10 million. Let me know. Oh, and if you made a mistake, and you’re not actually the president, press or say two now. Otherwise, goodbye, Mr. President.”

If you press two, it will take you to a message with information on where to make sure you’re registered to vote in the upcoming election.

“Congratulations on not being the president! If you do not need a lawyer specializing in president crime, why not visit votevotevote.com to make sure that you’ve registered to vote in the election? That’s right. This is a public service announcement. Gotcha! Anyway, please check your voter registration and make a plan to vote. Goodbye.”

By the way, are you registered to vote? You should check that out NOW.