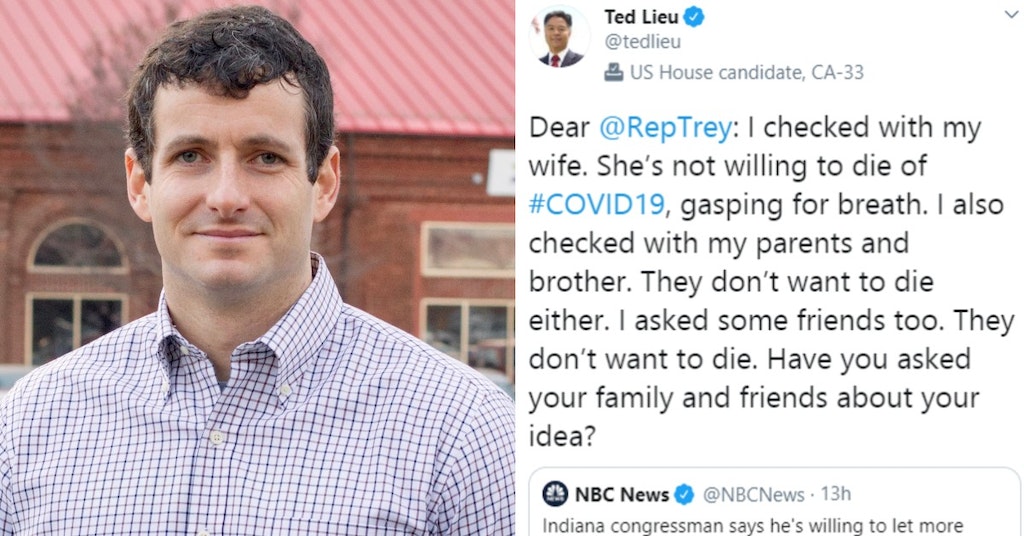 Another Republican politician has come forward to say that your grandparents and your immunocompromised friends should sacrifice themselves for the sake of “the economy,” and people are just as happy about the idea as the last time it was floated.

This time, it’s Representative Trey Hollingsworth of Indiana, who has a net worth of $50.1 million and is the 12th richest member of Congress. Hollingsworth, real name Joseph Albert Hollingsworth III, claims that letting millions die is the lesser of two evils if the other one is causing “dramatic economic harm.”

Indiana congressman Trey Hollingsworth says letting more Americans die of coronavirus is the "lesser of two evils" compared to the GDP going down and the economy tanking. Hope his constituents take note. https://t.co/qzI55ITZ70

“There is no zero-harm choice here,” Hollingsworth said in an interview with Indiana radio station WIBC. “Both of these decisions will lead to harm for individuals, whether that’s dramatic economic harm or whether that’s the loss of life. But it is always the American government’s position to say, in the choice between the loss of our way of life as Americans and the loss of life, of American lives, we have to always choose the latter.”

Hollingsworth is not the first Republican to suggest that vulnerable Americans sacrifice their lives so that millionaires like him can go back to exploiting our economic system and the workers who make it run. Texas Governor Dan Patrick recently suggested that our grandparents would be happy to die so that the economy could live, which also didn’t go over well.

Still, Hollingsworth is insisting on tanking his approval ratings by pushing the idea that this is what the people want, and also falsely suggesting that scientists are not currently hard at work making a vaccine and won’t be until everyone can go back to work for some reason.

“We have got to get Americans back to where they want to be: back in the schools, back at work, back in churches, and frankly, back in the labs to continue to work on the biological problem while we fix the economic problem,” he said.

With a final insult, Hollingsworth suggested that people who don’t want millions to die just so we can go back to the old economy that was only working for the rich are childish.

“It is policymakers’ decision to put on our big boy and big girl pants and say, ‘This is the lesser of these two evils.'”

We have to admit, it does take some pretty big pants to tell your constituents that many of them should drown on dry land for his bank account. Can you guess how people are feeling about Hollingsworth III right now?

Once again disappointed in my Congressman. How dare you tell working families that they have to go back to work and put themselves in danger, when you have been too scared to host a single town hall in three years? #IN09 https://t.co/Up7XEk7SZY

The Congressman is Trey Hollingsworth @RepTrey.

This wealthy carpetbagger from Tennessee swooped in to Indiana in 2016 & literally bought his seat.

Now he’s prioritizing his stock portfolio over the health of his #IN09 constituents.

I vow to support the D nominee for #IN09 after the June Primary, especially after BS like this from the incumbent:https://t.co/A9xipWZsdF

I nominate Rep Trey Hollingsworth to be the first to sacrifice himself for the rest of us.

GOP lawmaker: We must choose 'loss of American lives' over 'loss of our way of life as Americans' https://t.co/wb9Gy6UIJ8

“Pro-life” Congressman Trey Hollingsworth (Joseph Albert Hollingsworth III) is a 36-year-old who used daddy’s money to start a business & buy a congressional seat. He thinks you, your siblings, parents, grandparents, friends, and neighbors are all expendable. https://t.co/PH3rtjtPq2

More than 50 of Hollingsworth's constituents have already died of COVID-19.

But that's not nearly enough for him. He wants to kill more.

Indiana, are you really going to re-elect this guy in November? pic.twitter.com/KNAUbHCsgh

I notice our brave friend Trey is willing to lay my life down in order to preserve his $50mil fortune, but isn’t willing to lay his life down for his country by volunteering in a hospital or joining the military or serving as a first responder etc.

LMAO, the next time he goes to work will be his first time

Guess who’s up for re-election this November?