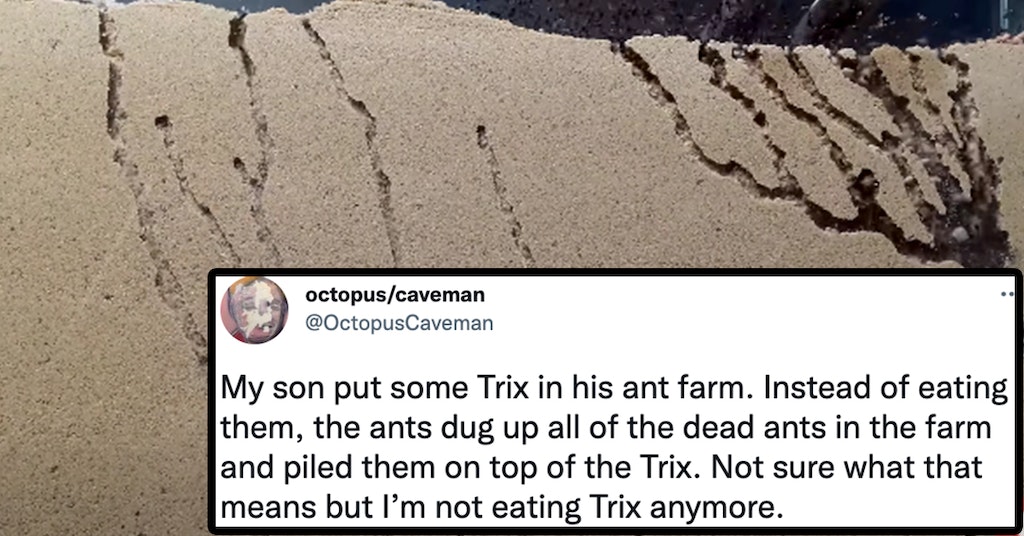 Twitter user OctopusCaveman amused and horrified his followers by posting about his son’s ant farm and some scientific experiments that went really really wrong fast. His 5-year-old son decided to throw a handful of Trix cereal into his pets’ habitat as a treat, but their reaction was not what either of them expected.

Instead of chowing down on the sweet cereal, they enacted some sort of bizarre ant funeral right that left the family disturbed.

“My son put some Trix in his ant farm,” he wrote. “Instead of eating them, the ants dug up all of the dead ants in the farm and piled them on top of the Trix. Not sure what that means but I’m not eating Trix anymore.”

That is very disturbing! What are we eating that tastes like an ant graveyard? Are dead ants delicious? I don’t know what to think.

But he did provide proof with a photo of the uneaten Trix and ant corpses all over the place:

However, some Twitter users actually had an answer for why this was happening that didn’t involve the supernatural or some sort of curse on the family’s house. Trix uses a lot of canola and sunflower oil, which contains a substance called oleic acid. The smell of oleic acid tells ants that something is dead and gets them to carry the dead out of their tunnels.

All it takes is the smell, even live ants covered in oleic acids will get dragged to the corpse pile against their will.