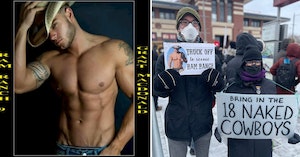 The anti-vaxxer trucker protest in Canada known to supporters as the “Freedom Convoy” has grown over the weeks as they’ve been joined by far-right groups up to and including open neo-Nazis and Ottawa police have appeared more apt to hug them than do anything they’ve ever done to Indigenous protesters fighting for their land.

The protest managed to shut down the most important highway for trade between the U.S. and Canada until late Sunday after Prime Minister Justin Trudeau invoked the Emergencies Act, expanding government power to remove the blockade.

However, this and the relatively small number of arrests may not be the main reason that the convoy is beginning to collapse. Tired of government inaction as Canadian nationalists and various bigots harass locals and anyone wearing a mask and honk their horns late into the night, every night, everyday citizens of both the U.S. and Canada have taken to disrupting the protest in their own way.

Some incredible individuals were able to figure out how to enter trucker convoy chats on Zello, a push-to-talk walkie-talkie-style communication app, and have been pranking them into listening to a 2012 song by Grant MacDonald that has been labeled as “porno-metal” — Ram Ranch. The song features generic, badly recorded metal guitar and drums in the background while a guy talks about naked cowboys having sexual relations with one another at a certain ranch.

Look up the lyrics while at work at your own risk.

Alternatively, you can find clips of these infiltrations on social media, where people are posting audio of themselves posing as convoy protesters or supporters and then start playing or singing Ram Ranch, to the inevitable distress of the right-wingers who gave them the mic. Even better, the real protesters have been unironically complaining about the increasing problem by saying that they got “rammed,” sometimes multiple times per day.

This counter-protest movement soon had its own hashtag, #RamRanchResistance, coined by independent reporter Noelle, as those opposed to far-right insurrections supported by Nazis reported on their progress in taking down the convoy. Their efforts have been credited with helping to significantly disrupt the organizing efforts of the anti-mandate crowd, with much of that credit coming from the right-wing protesters themselves as they complained that they couldn’t have a meeting without getting rammed.

At the same time, hackers were able to break into the fundraising campaigns through GiveSendGo that the convoy has been using to feed and otherwise support the long-term protesters occupying the Ottawa streets, cutting off their cash flow and leaking donor names.

Without money and with the strong majority of Canadians, including truckers, against the convoy, these kinds of disruptive counter-protest actions paired with actual government action targeting the political right for once, the anti-mandate protest appears to be on its way out.