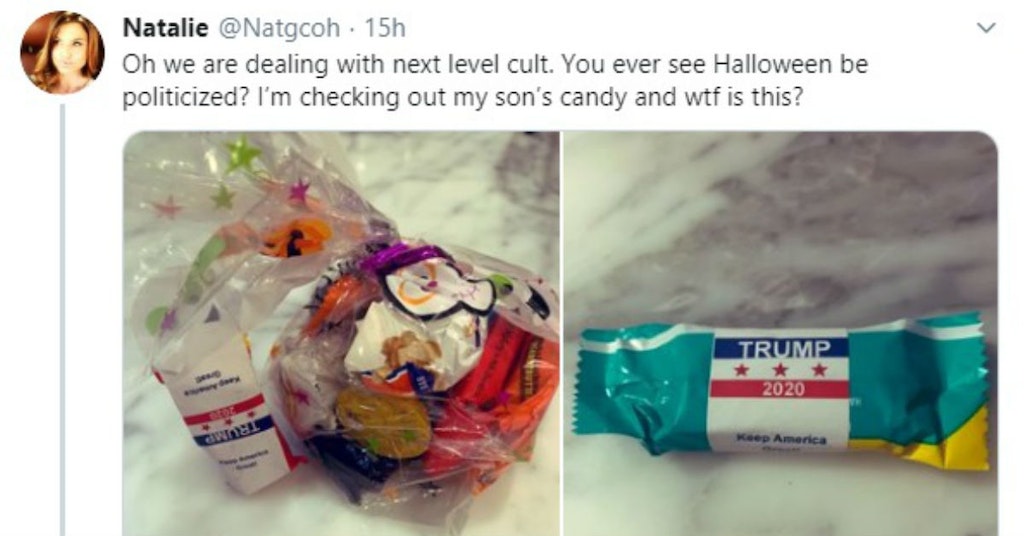 Parents across the U.S. were not happy to find that some of their kids’ Halloween candy came with political messages, as though politics doesn’t invade every other aspect of their lives. The day after Halloween, multiple people took to Twitter to post photos of candy with Trump 2020 stickers and tags attached, some with rather child-inappropriate messages.

My nephew got this in his Halloween sack last night. Swedish Fish? Yuck! pic.twitter.com/EybYhbgwVw

As though putting a campaign sticker on candy meant for children who are (hopefully) too young to vote anyway isn’t bad enough, you have to include the slogan that contains a cuss word? What are Trump fans thinking?

Many commenters are warning the parents who found these messages mixed in with the candy to toss them out.

Oh we are dealing with next level cult. You ever see Halloween be politicized? I’m checking out my son’s candy and wtf is this? pic.twitter.com/qRkZ2XBWDf

However, not everyone on Twitter is appalled by this bizarre, child-targeted campaign strategy. A little bit of searching turned up one of the culprits, or at least the girlfriend of one of the culprits—self-described radio political news contributor Kambree Kawahine Koa.

My girlfriend is handing out Halloween candy tonight with Trump 2020 stickers on them. Savage 😎

Though some people praised Ms. Koa’s girlfriend for this idea, others were not impressed by the candy stickering. Even fellow Trump supporters thought it was in bad taste.

Oh just let the kids be kids and don’t ruin their night by some liberal mom freaking out. I like Trump. But Kids should be left out of Politics.

Are the people putting these stickers on kids’ Halloween candy the same ones who complain about politics in their entertainment any time there’s an LGBTQ+ person on TV? Pretty sure that Venn diagram is just a circle.

Meanwhile, normal people have some suggestions as to what could be done with the campaign candy.

I would put it back on their porch. 😂