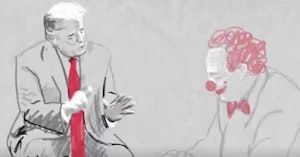 As part of his recent rapid retweeting, Donald Trump shared a 2020 campaign video in the style of A-Ha’s iconic “Take on Me” music video. The clip highlights moments from his 2016 campaign and presidency audio from one of his speeches plays to gentle piano music.

The video was originally posted by Power Tie (Twitter handle @realPowerTie) which claims a mission to “create a more informed public, challenged and invigorated by a deeper understanding of silly videos.”

In reality, the videos they post on their Twitter and YouTube accounts only seem to be silly if they’re attacking Democrats, whereas this video is entirely un-silly.

The video highlights Trump’s favorite red tie and other red things, including MAGA hats and a clown wig and nose on Senate Minority Leader Chuck Schumer in a depiction of a meeting in which Trump is ranting about something and Schumer is hunched over, presumably with a broken spirit.

This particular part of the video has raised eyebrows due to the fact that the latest thing white supremacist and neo-Nazi groups have co-opted to signal to one another is, in fact, clowns.

According to an article by The Forward posted in May, online hate mobs have invented the idea that they’re living in a “clown world,” meaning one in which Jewish people are supposedly secretly in control of everything. To go with that, they’ve put a clown wig and nose on the co-opted image of Pepe the Frog and dubbed him “Honkler” (a reference to Hitler), and the new antisemitic dog whistle is “honk honk.”

As though the world wasn’t already weird enough.

If that wasn’t enough, Power Tie reshared their own video with another white supremacist dog whistle, calling critics “NPCs.”

Looks like "Take On Me. Orange Man Bad." is the NPC response.https://t.co/9tQaLWcitB

“NPC” is short for “non-player character,” a video game term for the characters in a game who are not controlled by the player and often give stock responses when addressed by the player. “Alt-right” groups, particularly those of the “red pill” variety, use this as a dehumanizing term for anyone on the left to suggest that they are all brainwashed.

Of course, it’s impossible to say definitively whether or not Trump shared the video as a wink to white supremacists. It’s certainly not as explicit as saying that there are “good people on both sides” when talking about the Charlottesville white supremacist rally that ended in the death of Heather Heyer. He may have simply wanted to share it because he loves it when people suck up to him.

Either way, people are not loving the video, except as fodder for jokes.

It looks like the Take on Me video, so:

????Tweeting away
Don’t know what he’s trying say
Dumber every day
Today’s another day to find him
Whining away
It’ll be coming to end OK

Of course this weird ass video ends with a traitor disrespecting the flag. This Country must have an impeachment of Donald J. Trump. Our national security depends on it.

they forgot to make your hands bigger

This is a nice reminder that you’re not only a malignant narcissist but also just weird.

Donald Trump dancing like a drunk Colonel Sanders is an entire mood. pic.twitter.com/C3LmAFEnsl

Well, that’s 39 seconds of my life that I’ll never get back…

Broken system? Or you mean the one where your daughter @IvankaTrump gets her own trademarks and trade deals with China ???????? or do you mean the appointment of a sexual predator to SCOTUS #Kavanaugh or do you mean the incitement or racial violence comes sponsored by the @NRA where…