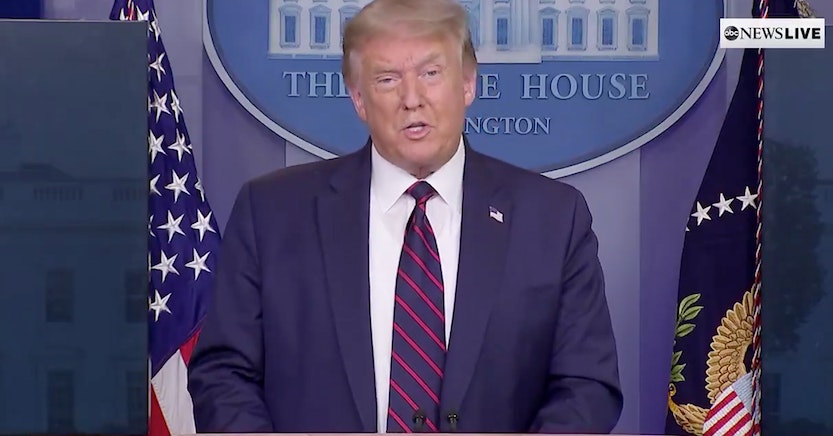 Is President Trump finally be starting to take the coronavirus slightly more seriously?

In a press briefing on Tuesday, Trump admitted that the outbreak “will probably, unfortunately, get worse before it gets better.”

“Something I don’t like saying about things, but that’s the way it is,” he continued. “That’s what we have. You look over the world, it’s all over the world, and it tends to do that.”

His insistence that what’s happening in the United States is similar to what’s happening all over the world, despite many other countries handling things better, and boasting lower death rates and a greater ability to safely reopen things than us because of that, is more in line with Trump’s usual preference to deflect blame and tell his voters what he thinks they want to hear.

He also repeatedly referred to COVID-19 as “the China virus” and yet again insinuated the early lack of preparedness should be blamed on the Obama administration leaving him “very, very empty cupboards.”

And, despite saying the the virus will get worse before things improve, Trump reiterated one of his favorite claims — that it will just magically disappear at some point.

The one other positive that came from the press briefing is that Trump, who has finally been seen wearing a mask, months into the pandemic, repeated his support for masks.

“Whether you like the mask or not, they have an impact,” he said.

Any time Trump manages to hit the lowest level of competency in handling something that would be a no-brainer for most presidents of any political party, people bend over backwards to express their shock at how maybe something is finally changing. In this case, it’s his alleged “shift in tone” that seems to be warranting cookies for the president.

But these brief moments of doing the right thing fail to stack up against the perpetual mishandling of the pandemic, not to mention Trump’s refusal to enact meaningful change to get us through this. And briefly admitting things are going to get worse before returning to deflecting and denying hardly constitutes a genuine “shift in tone.”

Let’s talk “Trump’s new tone” when he actually has one.