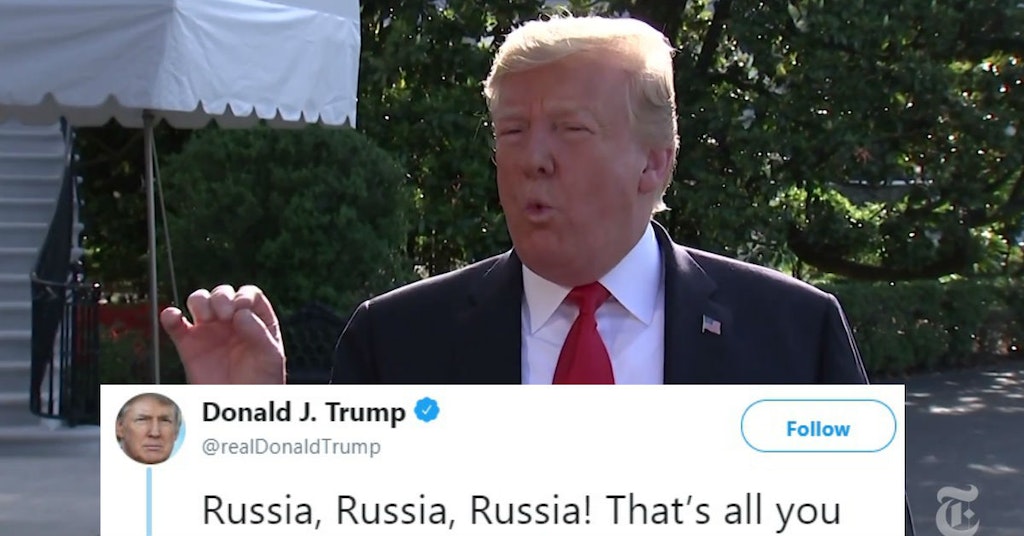 Trump Admits Russia Helped Him Get Elected, Says The Opposite Minutes Later

Trump tweeted this morning, which is not news. The news is that he straight up admitted in one of his Mueller investigations tweets that Russia did, in fact, help him get elected. He claims he had nothing to do with them helping to get him elected, but that still means that they helped him get elected.

Russia, Russia, Russia! That’s all you heard at the beginning of this Witch Hunt Hoax…And now Russia has disappeared because I had nothing to do with Russia helping me to get elected. It was a crime that didn’t exist. So now the Dems and their partner, the Fake News Media,…..

Major news outlets are calling this an “extraordinary admission” from the president. Up until now, he’s avoided speaking this truth, even though multiple U.S. intelligence agencies came to this conclusion in 2017. Instead, he’s railed against Democrats and others concerned about a hostile foreign nation interfering in our elections, accusing them of being obsessed with the issue he tweets about on a near-daily basis.

Of course, less than an hour later, he left the White House to head to Colorado Springs to deliver the commencement speech at the local Air Force Academy. Reporters tried asking him about the apparent admission in his tweet, but he brushed them off by directly contradicting himself.

“No, Russia did not help me get elected,” he said. “I got me elected.”

Speaking of Jan, people are also making fun of Trump’s “Russia, Russia, Russia” whining by comparing him to Jan Brady’s “Marcia, Marcia, Marcia!” It got to the point that Jan Brady was trending on Twitter, alarming Eve Plumb fans.

Sees Jan Brady trending.
Looks to see if actress is dead.
Sees why Jan Brady is trending.
Goes back to bed pic.twitter.com/odfDjxmxdY

The rest of us are busy hitting Trump over his admission-retraction mess.

You don't have a problem with Russia illegally meddling with the United States of America's presidential elections. That's what Dems and the media continue to try to make you aware of.

Also, why didn't you report Russian advances to the FBI? It is illegal for them to interfere in our election. You also have done nothing to stop them from doing it again in 2020.

What are you doing to protect the nation from Russian attacks pic.twitter.com/K0jbwKkhWo

So you admit they helped you get elected. By the way, Russia hasn't disappeared. Last I heard, your good friend Sarah could still see it from her house.

Russia and their mob money are clearly your life support system. Through Deutsche Bank and private transactions. Your money laundering and lies and corruption will be known long before 2020. You are headed down the rat hole. Perfect for you

Right! You are illegitimately elected! I could not agree more.

He finally accepted that Russia helped him to get elected! Good job Trump, taking the first step is always the hardest one. pic.twitter.com/cUAVOTD6Zl

Exhibit # 1023 – Russia Collusion/Trump Treason… thank you for giving so much material to your future prosecutors!

What is more frightening? A President who willingly, even if for a moment, acknowledges help from an adversarial foreign power to help him get elected? Or one with this little command both of his emotions and any discernible language skills? Flip a coin. https://t.co/kkGOj47EZc

Trump can't even defend himself well, what makes anyone think he'd be better or more interested in defending the rest of us Americans?https://t.co/ELUAcZua6V

Not just a Freudian slip, a Freudian pinwheeling skid on a banana peel down a greased stairwell into a generously lubricated chasm.https://t.co/oMOFwomZBm

He walked right into the wall.

I think @SpeakerPelosi is just waiting because she knows he will end up impeaching himself.

Sure, why not just say it out loud….it’s not like such an admission brings with it any consequences!

If Russia helped Trump “get elected,” then there was no witch hunt and no hoax. Trump’s tweet just blew up years of his own propaganda and Fox News’ Deep State conspiracy theory BS.

Particularly now that Trump has finally acknowledged that Russia helped him get elected… what say the Republicans? https://t.co/hl1Rte9hKZ

How will Fox News spin this one?