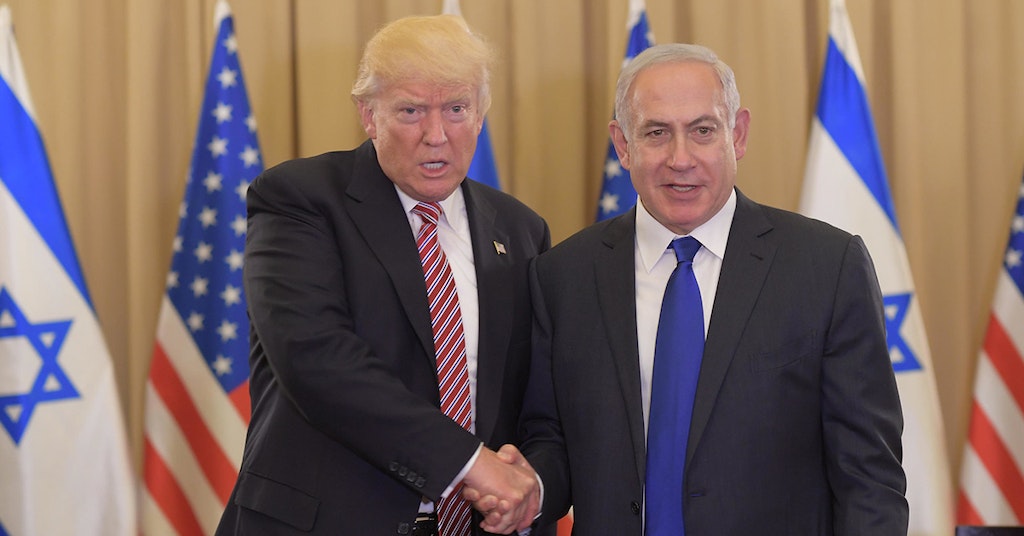 Donald Trump said to reporters today that he does not think highly of Jewish people who vote for Democrats and engaged in the same kind of antisemitic tropes that had people up in arms against Representative Ilhan Omar. During a meeting with the president of Romania in the Oval Office, Trump for some reason got on the topic of Israel.

“I think Jewish people that vote for a Democrat — I think it shows either a total lack of knowledge or great disloyalty,” he said right before concluding the meeting.

TRUMP: “I think any Jewish people that vote for a Democrat — I think it shows either a total lack of knowledge or great disloyalty.” pic.twitter.com/I2lqFYTgXq

The video clip above starts with Trump attacking Omar and Rep. Rashida Tlaib, both of whom were recently barred from visiting Israel due to their criticism of the government’s treatment of Palestinians. Tlaib, who is Palestinian herself and has family living in the ever-shrinking West Bank, recently gave a tearful statement during a press conference about how the Israeli government has treated her loved ones.

“As a young girl, visiting Palestine to see my grandparents, I watched as my mother had to go through dehumanizing checkpoints—even though she was a United States citizen and proud American,” she said.

Trump tweeted his reaction to Tlaib’s words, accusing her of faking her emotion and of “violence, craziness,” and antisemitism.

Sorry, I don’t buy Rep. Tlaib’s tears. I have watched her violence, craziness and, most importantly, WORDS, for far too long. Now tears? She hates Israel and all Jewish people. She is an anti-Semite. She and her 3 friends are the new face of the Democrat Party. Live with it!

Much of the increased discussion around Israel and the occupied territory of Palestine started when Rep. Omar was criticized by certain Jewish leaders and community members who claimed she was engaging in antisemitic tropes by bringing up the idea of “dual loyalty” to the U.S. and Israel. Other Jewish individuals denied the idea that her statement was antisemitic, saying her words were taken out of context.

The idea that Jewish people are loyal to Israel over anything else is an old antisemitic stereotype that people have used to as an excuse for hate for centuries. Trump’s “great disloyalty” comment seems to be directly engaging in this trope, as many Jewish individuals have already pointed out.

For Trump 2 accuse Jewish Democrats of 'disloyalty' bc of perceived anti-Israel sentiment in the Dem Party is textbook anti-Semitic. It presumes we should b 'loyal' 2 Israel, as if we aren't Americans. We are not Israelis & owe Israel NOTHING. Trump & Bibi both need to learn that https://t.co/SB31u5tbTY

"The Jews are not loyal to the state", said Adolf Hitler.
Trump told reporters that Jewish people in America who vote for members of the Democratic Party show "either a total lack of knowledge or a great disloyalty." https://t.co/PT6H9LXr1u via @HuffPostPol

Accusing the jews of disloyalty.
When did we heard this before?

Ah, I wondered when he was going to let his antisemitism start showing. That’s another box checked off.

Only 24 percent of Jewish individuals in the U.S. voted for Donald Trump in 2016.