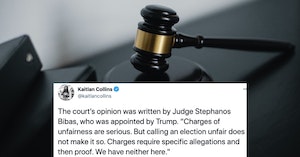 It’s hard to keep track of all the failed cases launched in various states by Donald Trump’s team of lawyers. The most recent one to absolutely tank was shot down in Pennsylvania on Friday in a federal appeals court. The Huffington Post reports that the case was argued by former mayor and current crackpot Rudy Giuliani last week, who claimed Pennsylvania fell victim to widespread voter fraud. Falsely.

Circuit Judge Stephanos Bibas, Chief Judge D. Brooks Smith, and Judge Michael Chagares were all appointed under Republican presidents, but none of them ruled in favor of Donald Trump. Bibas—who was appointed by President Trump— wrote an opinion that was notably blunt.

“Free, fair elections are the lifeblood of our democracy. Charges of unfairness are serious,” Bibas wrote. “But calling an election unfair does not make it so. Charges require specific allegations and then proof. We have neither here.”

The case actually isn’t deciding whether or not the accusations or true—it was about whether or not the campaign should be allowed to amend their complaint a second time. Since the district court judge called it a “Frankenstein’s Monster, has been haphazardly stitched together,” it probably needs the revisions.

Bibas doesn’t think that the first revision did enough to legitimize the complaint or provide actual evidence, so why give them a second round?

Campaign spokesman to Joe Biden, Mike Gwin, responded to the ruling by saying, “This election is over and Donald Trump lost, both in Pennsylvania and nationally. Desperate and embarrassingly lawsuits like this one will continue to fail and not change the fact that Joe Biden will be sworn in as President on January 20, 2021.”