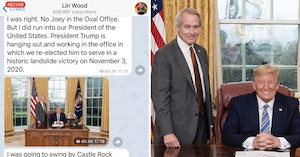 Photo via the White House, @anthonycwalker/Twitter

Trump Attorney Goes Full Q, Claims He Looked For Biden At The White House And Found Trump Instead

Former presidential attorney Lin Wood raised eyebrows last week when he posted a series of photos on Telegram claiming to have wandered through the White House looking for Joe Biden and instead found Donald Trump working away in the Oval Office.

It’s unclear whether this was meant to be some kind of joke, as the photos are clearly from March 2020 and Lin Wood would not be allowed to just walk around the White House without security, but they seem to echo a popular QAnon conspiracy theory.

After Trump quietly left the White House on January 20 and repeatedly failed to reemerge and strike down the evil Democrats like QAnon followers kept saying he would, some had no choice but to cling to the idea that Trump is still president, just in secret, and Biden is a hologram or robot or something.

Wood’s Telegram posts seem to encourage this idea, claiming that he looked all over the White House for “Joey” and ended up in a cemetery after saying hey to Trump at the resolute desk.

In his messages, Wood claims that he got “a bit lonely” waiting to meet with Biden (and already the story is flimsy because what would Biden want with him) and had his assistant wait in his place so he could “search other areas of the house for him.” Which is also something that wouldn’t happen.

“Not sure if I can find Joey in the house so I thought I would check outside,” he wrote under a photo of an empty table.

“No Joey in sight. One more room to check,” he claimed with photos of the White House exterior. “Wow. I thought I might find Joey in the China room making an illegal deal for himself. But nope. No Joey.”

Wood then makes the incredible claim that not only was the last room he checked in the White House for the president the Oval Office but also that he was just able to wander inside and instead of Biden, he found Trump!

“I was right. No Joey in the Oval Office. But I did run into our President of the United States. President Trump is hanging out and working in the office in which we re-elected him to serve in a historic landslide victory on November 3, 2020.”

This was posted with a photo of Wood standing next to a smiling Trump at the desk. Wood then commented that he was going to look for Biden in “Castle Rock Studio,” referring to a related conspiracy theory that the White House the public has seen since January 20 is actually a movie set, but someone called “GhostEzra” suggested he look in a cemetery instead.

It remains unclear what the purpose of this little Telegram tale is, whether anyone’s really supposed to believe it or if Wood is just trying to remain relevant somehow, but QAnon followers have already been spotted using this to reaffirm their belief that Trump will save them all.

Wood has been pushing QAnon conspiracy theories since before Trump lost the 2020 election and has continued to do so. The Sunday before posting his little story about his White House search, he reportedly drew the letter “Q” in the air with his finger at a campaign event and claimed that Trump would be back.