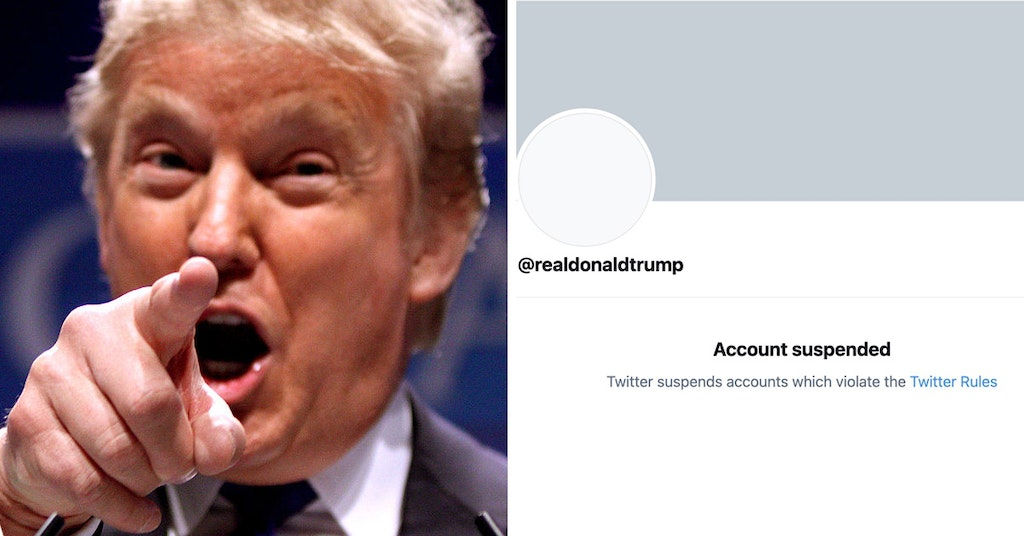 Twitter announced today that President Donald Trump has been permanently banned from the social media platform.

The company’s safety account tweeted a statement saying “After close review of recent Tweets from the @realDonaldTrump account and the context around them we have permanently suspended the account due to the risk of further incitement of violence.”

Trump’s personal account (@realDonaldTrump) had 88.7 million followers prior to its removal, according to CNN, and all of his tweets are gone.

One of the offending tweets was a video message to his followers who stormed the capitol in an attempt to stop the certification of Trump’s election loss to Joe Biden. “We love you, you’re very special,” Trump told the mob while complaining about “evil people” who stole the election from him and coaxing them to “go home.”

Trump returned to Twitter on Thursday with a more subdued and scripted video conceding that he lost the election, condemning the insurrectionists, and promising a “smooth” transition of power to the Biden administration.

Friday morning Trump tweeted a more characteristic message saying, “The 75,000,000 great American Patriots who voted for me, AMERICA FIRST, and MAKE AMERICA GREAT AGAIN, will have a GIANT VOICE long into the future. They will not be disrespected or treated unfairly in any way, shape or form!!!” He also revealed he wouldn’t be attending Biden’s inauguration on January 20th.

The news Trump had been permanently banned from Twitter was greeted with elation from liberals:

Some people mourned the dumb Trump tweets we lost for good:

Others imagined his frustration:

But most people just made jokes:

Of course, there is one wrinkle…

Both those accounts have considerably fewer followers than Trump’s personal account, and that one’s gone for good.