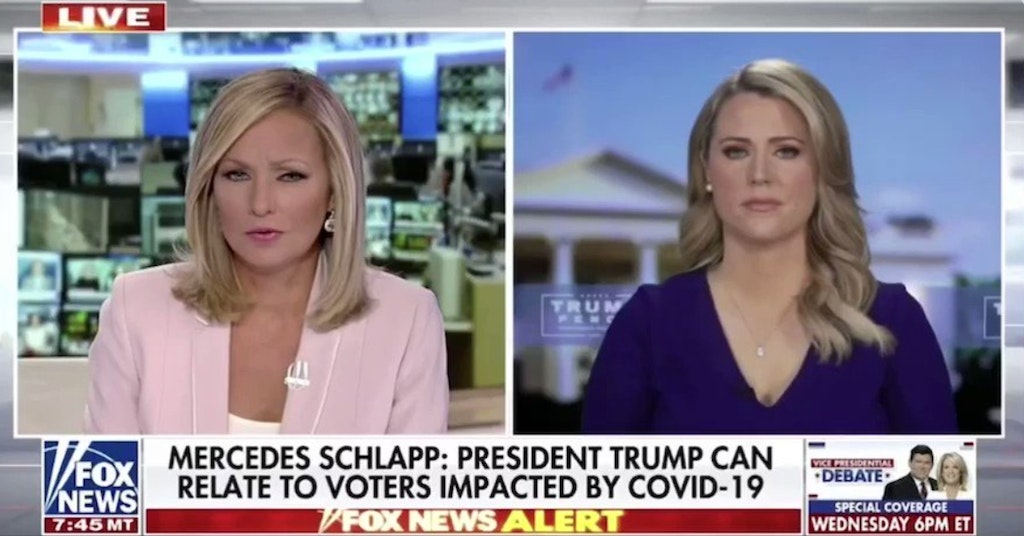 The Trump administration is doing the inevitable, and trying to spin the president coming down with COVID-19 as a positive in a last-ditch attempt to save his re-election efforts amid all the chaos.

Campaign aide Erin Perrine stopped by Fox News Monday morning to respond to the question of whether or not Trump’s experience with the virus will result in a shift in how his campaign addresses COVID-19 moving forward.

Perrine rambled on for a few moments about how Trump is “battling [coronavirus] head on, as toughly as only President Trump can do,” before somehow managing to turn the whole thing into an attack on Joe Biden.

The fact that President Trump and so many people connected to him have tested positive for COVID-19 over the past few days is, and should be viewed as, a negative. This isn’t a situation where he just happened to catch a dangerous disease alongside several million other Americans, it’s a situation where the leader of the country willfully downplayed the pandemic and refused to partake in safety measures to contain the spread.

For anyone to seriously reframe this as anything other than gross negligence is insanity, and to turn around and use it to dunk on the presidential candidate who practiced social distancing measures and therefore has not contracted the virus — despite Trump himself potentially exposing Biden and his team at the debate — is an extra level of absurdity that only this administration could achieve.

And people are already applying this backward kind of logic to other situations to show how utterly ridiculous it is.

To any rational person, this would all read as a major pivot from Trump’s longterm “strategy” of attacking Biden for actually wearing a mask, something his team has echoed over the last several months as well.

But it turns out the Trump campaign is going to continue to attack Biden on that front as well, as disgraced spokesperson Jason Miller accused the Democratic candidate on Sunday of wearing his mask “too often.”

Of course, we might have an easier time getting back to life as normal if people actually wore masks, as Biden does, rather than create and/or contribute to super-spreader events, as President Trump has now done.

Now that Trump’s campaign is attacking Biden both for wearing a mask to prevent catching or spreading COVID-19 AND not having caught COVID-19, the only thing left for them to do is to find some way to pin the blame for all of it on Barack Obama.