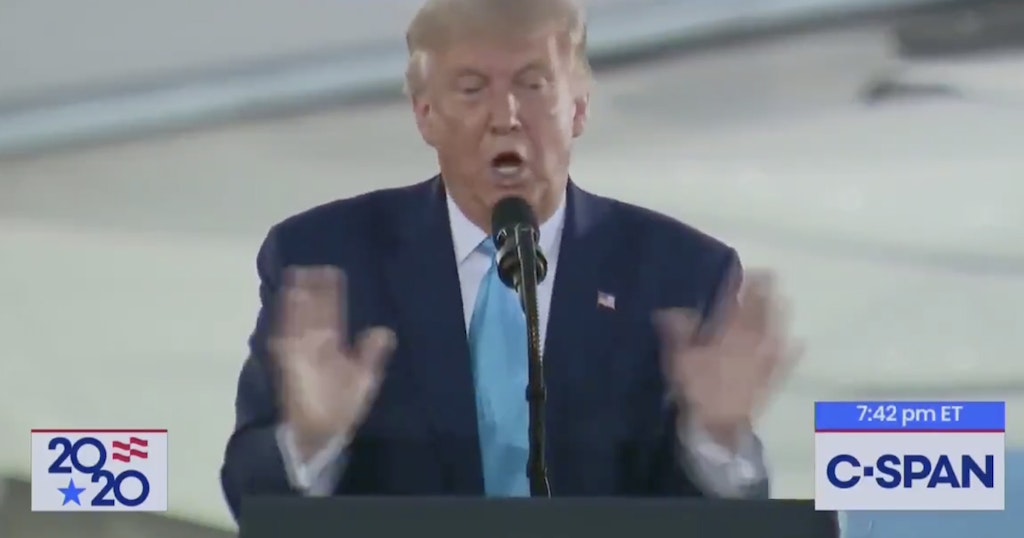 Donald Trump’s handlers can occasionally prod, poke, and manipulate him into saying something “correct” about the pandemic when on camera. Once in awhile, he’ll even put on a mask. But the second he gets a whiff of spoiled mayo off one of his rally crowds, he goes absolutely off the rails. Days after the U.S. confirmed 6 million cases of coronavirus, Trump started dragging Joe Biden for wearing a mask during a deadly pandemic.

His words were said at a rally in Latrobe, Pennsylvania, according to the HuffPost, asking the walking disease vectors if they’ve ever seen “a man that likes a mask as much” as Joe Biden.

“He makes a speech and always has it ― not always, but a lot of times ― he has it hanging down, because you know what? It gives him a feeling of security, Trump said. “If I were a psychiatrist, I’d say, ‘This guy’s got some big issues.’ Hanging down. Hanging down!”

(Trump’s heard of a psychiatrist and he’s still like this?!)

As recently as May, Trump retweeted this post by Brit Hume that mocked Biden for covering his face in a pandemic:

Now, the death toll is over 186,000, closing in on that 200k mark that Trump and his cronies unveiled as a possible scenario for what would happen in the U.S. as things were going. There has been little help offered from the federal government and confusing messages from states, who have reopened everything in an apparent effort to avoid paying unemployment.

Biden was asked to respond to Trump’s remarks on CNN, and stated that Trump is an “absolute fool” for making mask-wearing a partisan issue.

“Presidents are supposed to lead,” he said, “Not engage in folly and be falsely masculine.”

Trump tweeted a picture of himself wearing a mask, so someone must have lassoed him into momentary rational behavior:

Countdown until he calls doctors losers for wearing PPE or something.