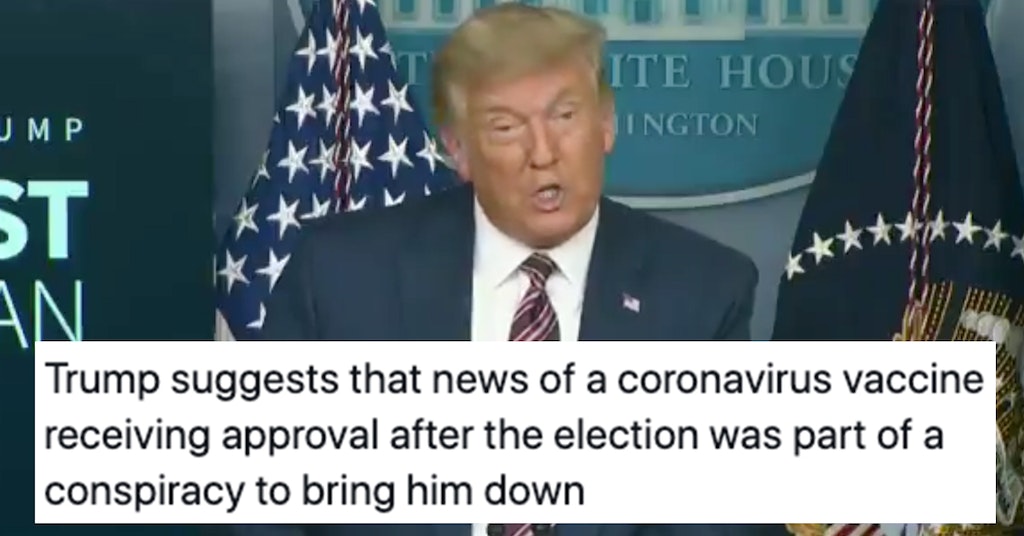 
In his first White House briefing room statement since Election Day, Donald Trump lashed out at “big pharma” and “big tech,” and of course the media, accusing pharmaceutical companies of running negative ads against him. He went after Pfizer specifically, but pronounced it like “FISA,” like the Foreign Intelligence Surveillance Act that troubled Trump during the investigations into his alleged ties with Russia.

And, as always, he claimed that he won the election.

"Big pharma ran millions of dollars of negative advertisements against me during the campaign – which I won, by the way, but you know, we'll find that out," he said. "Almost 74 million votes."

In addition to the charges that private pharmaceutical companies ran political ads against him, for which he provided no evidence, he claimed that Pfizer and others held back on the vaccine race to make him look bad. At least, we think that's what he's saying.

At one point, he also seemed to claim that "big pharma" held back the vaccine to spite him for allegedly lowering drug prices.

Such a scheme would have been a big risk considering the fact that the first companies to get the coronavirus vaccine out to the public will inevitably make a buttload of money. Additionally, the vaccine is still weeks away from being ready (at best), as it needs to be tested by the FDA before it can be distributed to U.S. residents.

Even so, the vaccine-making process has progressed significantly faster than many experts predicted. It would have been impossible for any company to get one through all the testing and trials before Election Day 2020.

Unfortunately for Trump, he seemed to undermine his own message by saying he's "been loyal to the special interests."

Trump did not remain to take comments after the briefing. He likely has to run off to his meeting with top Michigan Republicans in what many fear will be an attempt to convince them to overturn the will of the voters in a bloodless coup.

Just another Friday in the good ol' U.S. of A.