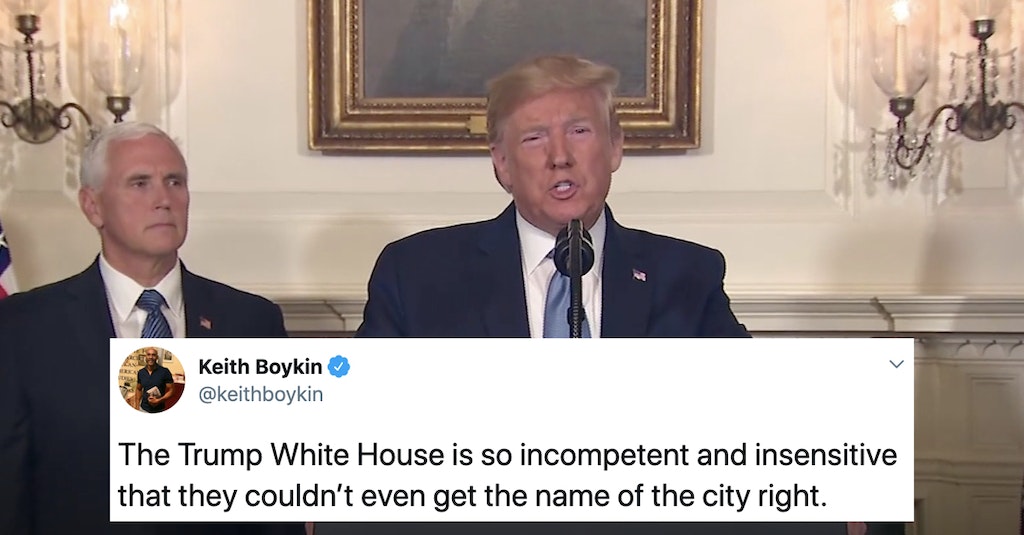 On Saturday, a 21-year-old man shot and killed 20 people at a Walmart in El Paso, Texas. Less than 24 hours later, a second shooter in Dayton, Ohio, killed nine people in the city’s busy historical district. The El Paso shooter was apprehended by police, the Dayton shooter died at the scene.

After a mass shooting, the nation generally expects the president to show up, makes speeches, and offer their support to the community. Trump dropped in on a wedding at one of his gold clubs.

Trump stopped by another wedding at Bedminster last night pic.twitter.com/38IEhTouFk

By Monday morning, the president was wrangled by his advisors to finally make some serious remarks referencing the mass shootings. Trump gave a press conference in the Diplomatic Room of the White House, with Vice President Mike Pence standing behind him. Both are attempting to project an understanding of the seriousness of the situation.

Trump inspired the white supremacist mass shooters with his hateful, racist rhetoric and now tries so hard to fake empathy and compassion for the victims that he casually confuses Dayton, Ohio with Toledo. He slipped up pretending to actually give a damn. pic.twitter.com/3allVrY8IZ

It probably is confusing trying to keep all the different places where gun violence is destroying lives straight. Just a few weeks ago, a shooter killed several people at the Gilroy Garlic Festival. There have been hundreds of shootings this year alone. But he is reading off a teleprompter, so it’s hard to understand what’s going on here.

It should be noted that Trump is not the only person to get confused about mass shootings this week. Presidential candidate Joe Biden also messed up, referring to the shootings as taking place in Houston and Michigan. He later corrected himself, which might not be something we will get from Trump.

Before “Toledo,” Joe Biden also confused the locations of the mass shootings, speaking at a fundraising event yesterday in San Diego. Per the pool report: pic.twitter.com/2xk6IiqG62

People watching were horrified that the president would make a mistake like that. Citizens of Toledo were all wondering if they were just hearing about a shooting in their city for the first time from the president. It was a mess.

That speech had no plan to get guns off the streets and no recognition of the President's own role in inciting this weekend's violence. He even misstated the name of the city involved in the mass shooting in PREPARED REMARKS. Just an abject failure and embarrassment.

As a lifelong Toledo resident, this is accurate. WTF indeed…🤦‍♀️

Everyone when Trump said Toledo instead of Dayton pic.twitter.com/WV074wFLCw

All the attention Trump received for his mistake made some wonder if it was a deliberate misdirect to distract the Internet from his other connections to the events—like inciting violence, encouraging white nationalism, and having a general lassez-faire attitude towards gun control.

Those things aren’t really forgettable, but “Toledo” is trending heavily on Twitter as people express their frustration with having a  president who can barely read.

“The shooter in El Paso posted a manifesto online consumed with racist hate,” Trump also said. “In one voice, our nation must condemn bigotry, hatred and white supremacy. These sinister ideologies must be defeated. Hate has no place in America. Hatred warps the mind, ravages the heart and devours the soul.”

That explains what’s wrong with him.