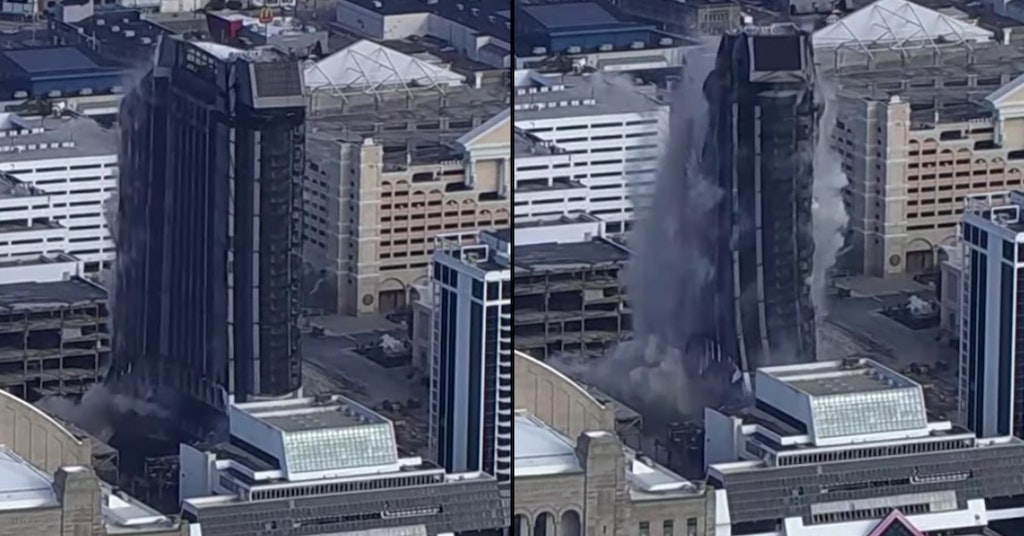 
The Trump Plaza Hotel and Casino in Atlantic City, New Jersey, a symbol of former President Trump’s projected wealth and influence, was imploded on Tuesday. People gathered to watch the building, officially closed in 2014, as it was destroyed, and cheered it as it came down.

Insider noted that: "Atlantic City Mayor Marty Small had wanted to auction off the ability to press the button to destroy the Plaza hotel, with the proceeds going to the Boys and Girls Club."

"Some of Atlantic City's iconic moments happened there, but on his way out, Donald Trump openly mocked Atlantic City, saying he made a lot of money and then got out," Small told the AP two months ago. "I wanted to use the demolition of this place to raise money for charity."

Philadelphia Inquirer photographer Tim Tai captured the planned implosion in a series of photos and tweeted them out, getting plenty of responses that labeled it "symbolic" and a "metaphor."

Even Trump's 2016 presidential election opponent, Hillary Clinton, got on board the schadenfreude by tweeting a wave emoticon in her quote tweet of Bloomberg's video of the tower coming down.

As the Associated Press reported, "The former Trump Plaza casino was imploded after falling into such disrepair that chunks of the building began peeling off and crashing to the ground."

Its account, carried by the Huffington Post, noted, "A series of loud explosions rocked the building around 9 a.m., and it started to collapse almost like a wave from back to front until it went straight down in a giant cloud of dust that enveloped the beach and boardwalk. Overall, it took the structure less than 20 seconds to collapse."

That article also noted, "The removal of the one-time jewel of former President Donald Trump’s casino empire clears the way for a prime development opportunity on the middle of the Boardwalk, where the Plaza used to market itself as 'Atlantic City’s centerpiece.'"

“The way we put Trump Plaza and the city of Atlantic City on the map for the whole world was really incredible,” Bernie Dillon, the events manager for the casino from 1984 to 1991, said in the article, listing a group of decidedly mid-'80s to early '90s celebrities who gravitated to the property for events and Trumpian hoopla.

Those who cheered may have not been aware that Trump no longer owns the property; AP reported that it now belongs to a "different billionaire," Carl Icahn, who "acquired the two remaining Trump casinos in 2016 from the last of their many bankruptcies."

Icahn, though he didn't assent to Small's wishes, did donate $175,000 to Small's chosen charity before the button was pushed.