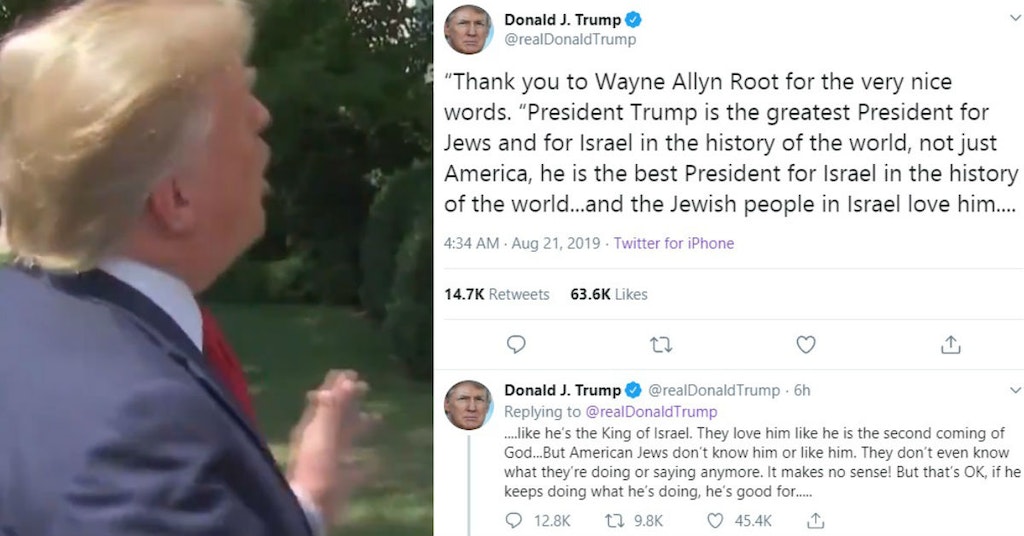 Trump Calls Himself ‘The Chosen One’ And ‘King Of Israel’ In One Day, ‘Antichrist’ Trends On Twitter

It’s been quite a morning for Donald Trump. First, he started his daily tweeting by quoting Wayne Allyn Root, another far-right talk show host and known conspiracy theorist, who not only called Trump “the greatest President for Jews and for Israel in the history of the world,” he claimed that Jewish people love him “like he’s the King of Israel.”

….like he’s the King of Israel. They love him like he is the second coming of God…But American Jews don’t know him or like him. They don’t even know what they’re doing or saying anymore. It makes no sense! But that’s OK, if he keeps doing what he’s doing, he’s good for…..

That must have really gone to his head, because in the same morning, he told reporters outside the White House that he is “the Chosen One” while talking about his trade war with China, saying “somebody had to do it.”

TRUMP: “The fake news, of which many of you are members, is trying to convince the public to have a recession. ‘Let’s have a recession!’ … I am the chosen one. Somebody had to do it. So I’m taking on China.” pic.twitter.com/OHmXOzoO7I

If you’re not familiar with Bible stuff, you might be wondering how these two things are related and why “Antichrist” has been trending of Twitter. In Christian lore, the Antichrist will declare himself to be the King of Israel and the new Jesus, or place himself “above God,” depending on who you talk to.

Evangelicals, pre-2016: The Antichrist is coming! Beware for it is written that the beast shall declare himself king in Israel; he shall exalt and magnify himself above every god!!

Additionally, many Christian fans of the end-of-days canon believe that the apocalypse will be ushered in by the restoration of Israel and the return of the Jewish people to their homeland, which some believe means kicking out all the Muslims. And Israel has definitely been systematically kicking out the Palestinians, who are majority Muslim, which Trump has not even pretended to have a problem with during his unwavering support of Israel.

So to sum up, Trump is pro-Israel and anti-Muslim, thinks Jewish people need to be entirely “loyal” to Israel, called himself “the chosen one,” and retweeted a guy saying that the Jewish people “love him like he’s the King of Israel” and the “second coming of God.”

If you’re an apocalypse-enthusiastic Christian, by all logic this should lead you to conclude that Trump is the Antichrist. Has Jared Kushner finally unloaded the 666 Fifth Avenue building yet or are the Trumps still involved in that particular bit of real estate?

Of course, if you’re Jewish, you might just be confused.

PSA #1: an antisemitic Evangelical is not a good source on Judaism or Jews.

Also, your periodic reminder that close to 80% of Jews voted against the guy who's encouraging white nationalists. https://t.co/33X7RgL425

As funny as this whole thing may seem, multiple rabbis have tweeted their alarm at Trump’s sharp turn into blatant and dangerous antisemitism.

This #kingofisrael crap is clearly about Trump speaking to his Christian evangelical base who believe Jews must return to Israel to hasten the second coming— a profoundly antisemitic idea. This is extremely dangerous for Jews across the globe.

I've said for 3 years: Donald trump is good for NOBODY except Donald trump. That's been clear as day from the beginning. All his tweets this week have put a target on American Jews. Increased security & fear abound. 2/

This peak Messiah complex from Trump comes after he declared that Jewish individuals who vote for Democrats are “disloyal” to Israel, an antisemitic trope for which Republicans piled on Representative Ilhan Omar for allegedly bumping up against. He doubled down on this claim during the same statements that led him to declare himself “the chosen one.”

This is probably why Jewish people overwhelmingly voted against this guy.