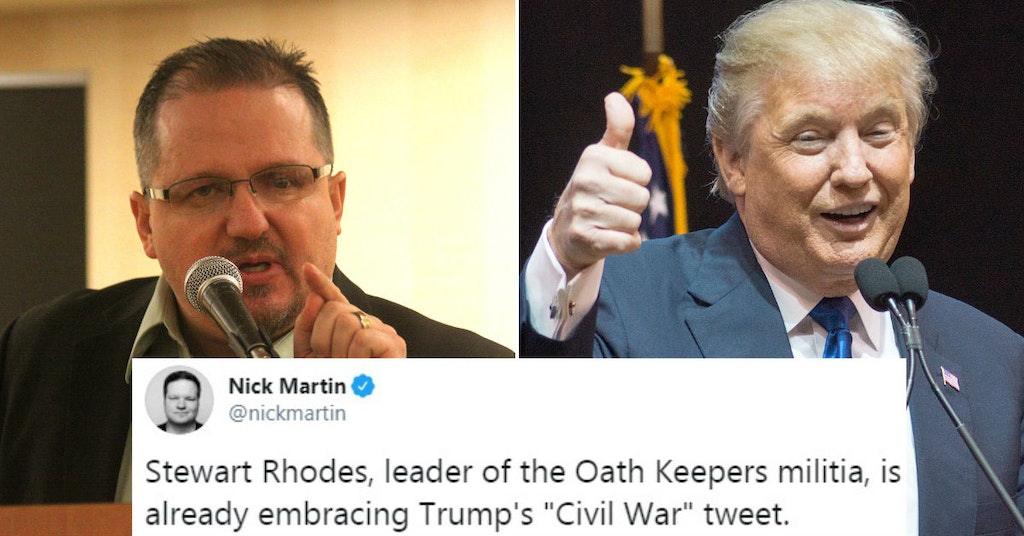 Donald Trump’s tweet directly quoting an Evangelical pastor that appears to threaten Civil War if he’s removed from office is being openly welcomed and promoted by the official Twitter account of the “Oath Keepers,” an openly anti-government militia group. Their thread highlighting Trump’s tweet was noticed and screengrabbed by freelance journalist Nick Martin.

“The term ‘civil war’ is increasingly on people’s tongue. And not just ‘cold civil war’ – full-blown ‘hot’ civil war. Fact is patriots consider the left to be domestic enemies of the Constitution bent on the destruction of the Republic,” Rhodes writes, “And we consider all that they are doing to impeach the President to be be illegitimate pretexts to simply undo the 2016 election results that they don’t like.” 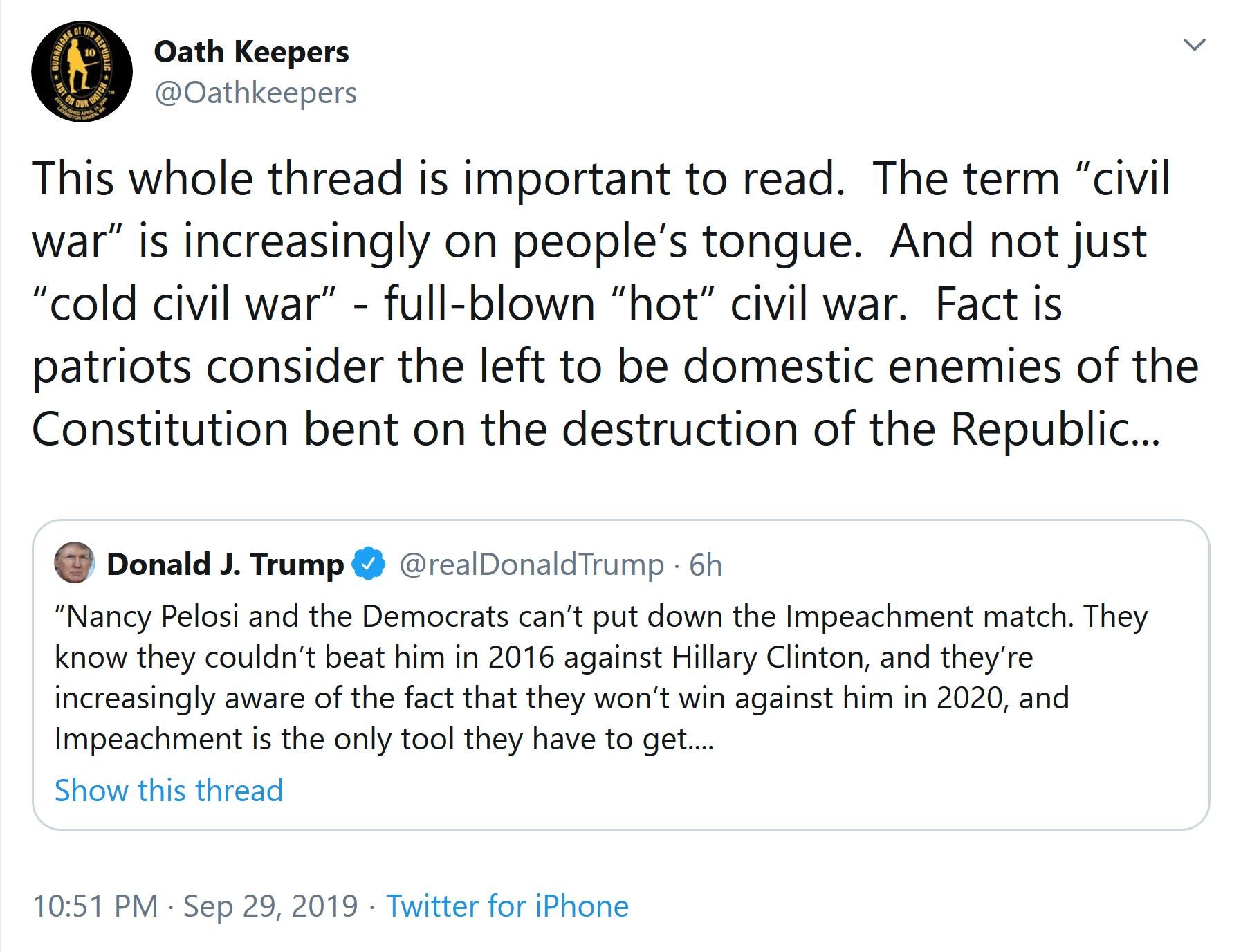 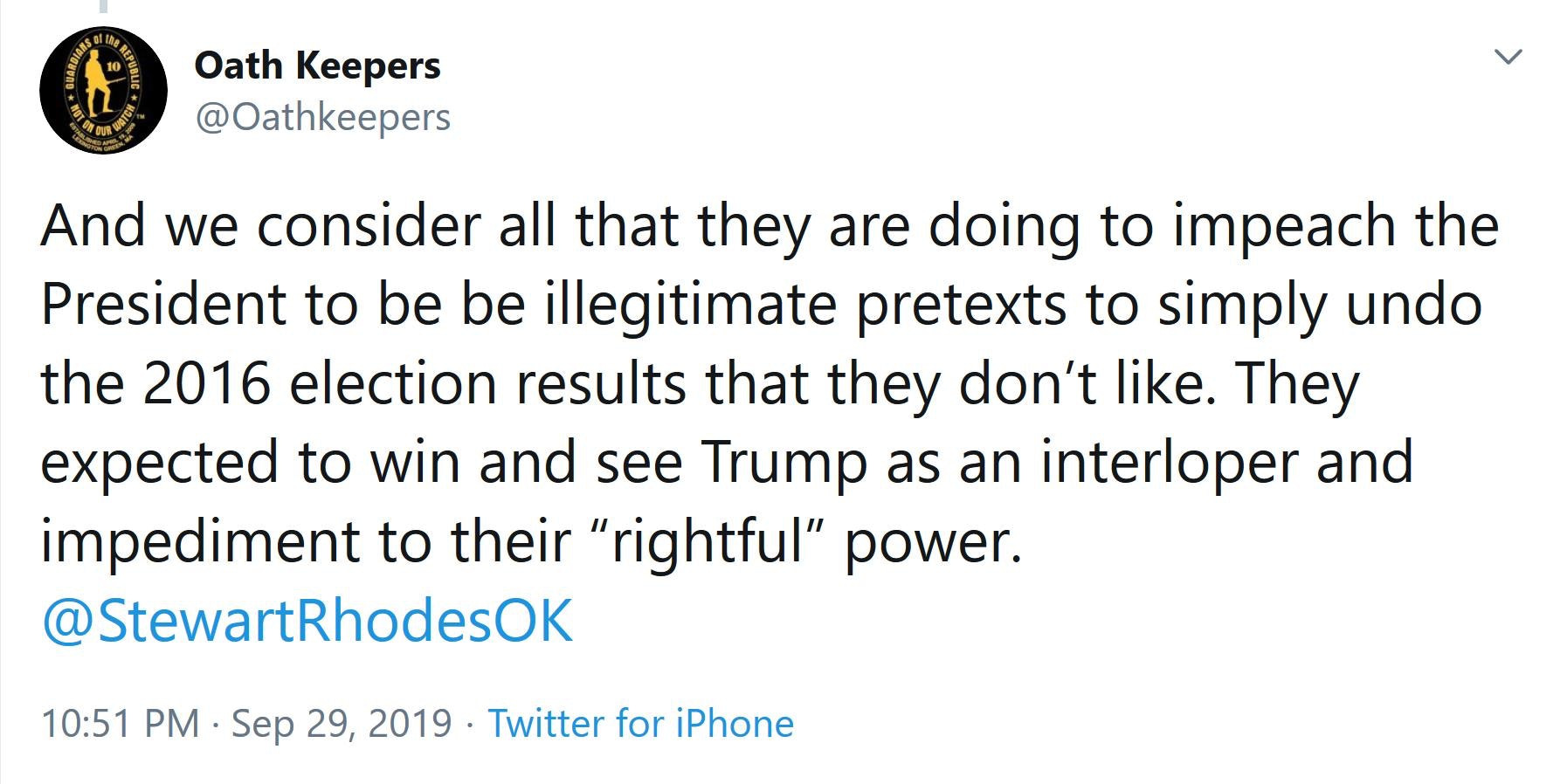 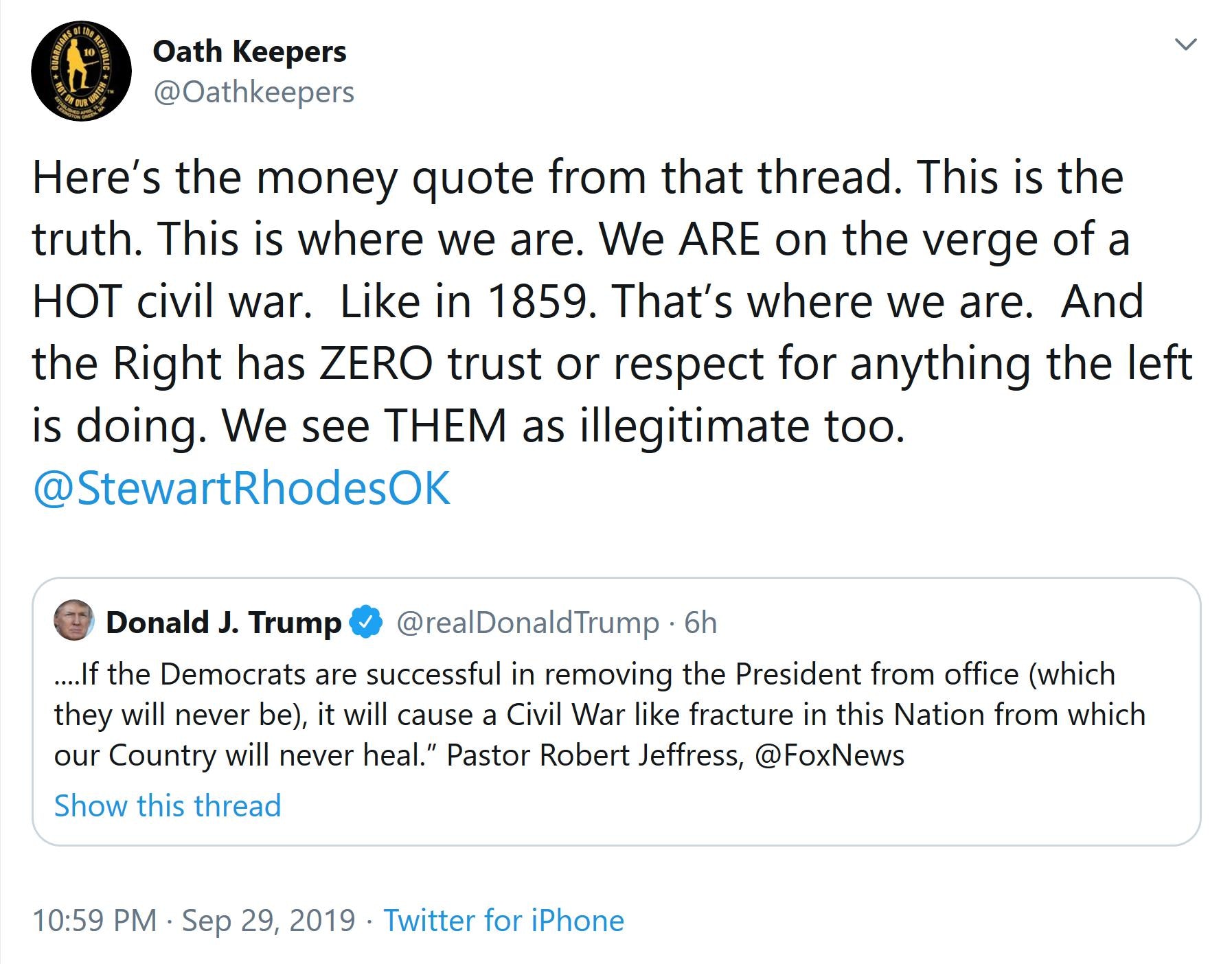 At the end of the Oath Keepers’ thread, they link the Trump tweet explicitly referencing a new Civil War, calling it “the money quote.”

On the heels of @realDonaldTrump retweeting threats of a new “civil war” if he’s impeached, the armed white supremacist Oath Keepers militia—comprised of former cops and military—makes it clear that they are prepared to go to war and commit bloodshed for their father-leader. pic.twitter.com/UmYmOQQok2

“We ARE on the verge of a HOT civil war. Like in 1859. That’s where we are,” the tweet reads. “And the Right has ZERO trust or respect for anything the left is doing. We see THEM as illegitimate too.”

When the nation’s most famous anti-government militia that openly hates the entire government is embracing your words as the President of the country, something has gone terribly wrong.

According to the Southern Poverty Law Center, the Oath Keepers boast “tens of thousands of present and former law enforcement officials and military veterans as members” and is “based on a set of baseless conspiracy theories about the federal government working to destroy the liberties of Americans.”

Please join me in reporting the heavily-armed fanatics at @OathKeepers for using Twitter to make threats of violence. https://t.co/y2tf6pbxa5

Since its creation in 2009, members of the Oath Keepers have been indicted for crimes including threatening to attack government officials, storing bombs in their homes, and threatening local law enforcement after failing to appear in court for a trial about him allegedly raping his seven-year-old daughter.

Oath Keepers was founded shortly after the election of Barack Obama, the nation’s first black president, and were very critical of him while often supporting Trump. They have been tied to multiple white supremacist groups.

I wrote a chapter about the Oath Keepers in my 2010 book The Backlash, about how the Tea Party and more extreme groups rose up as a reaction to the first black president. It was a straight line from that moment of racism to Trump and the current crisis. https://t.co/C4mIo6FDX4

Neither Trump nor any member of his administration have condemned this hat tip from the extremist militia.