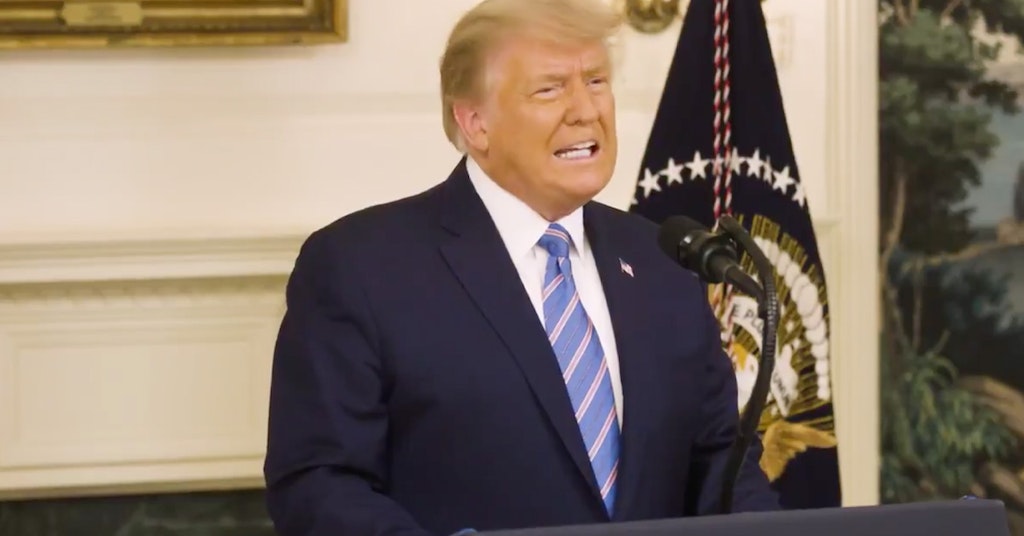 Trump Concedes To Biden In New Video After Capitol Riot

President Donald J. Trump has conceded the 2020 presidential election to President-Elect Joe Biden in a video after a violent mob of his followers failed to stop Congress from certifying the electoral vote count.

During the certification ceremony yesterday, Trump urged a mob of his supporters to march on capitol hill and called the election “stolen” by “evil people.”

The MAGA mob broke into the Capitol building, prompting an evacuation of legislators, and delayed the electoral vote counting. After the chaos that ensued—including five deaths and untold damage to the U.S. Capitol—Democrats and even some Republicans called for Trump’s removal, either by impeachment or by invoking the 25th amendment.

Facebook removed the president from their platform in response to the insurrection and Twitter suspended his account for 12 hours, granting him access only after he deleted tweets that praised the mob. “We love you, you’re very special,” Trump said in a video message telling the armed invaders to go home.

“I would like to begin by addressing the heinous attack on the United States capitol,” he begins. “Like all Americans I am outraged by the violence, lawlessness, and mayhem.”

“The demonstrators who infiltrated the capitol have defiled the seat of American democracy. To those who engaged in the acts of violence and destruction: you do not represent our country.”

Trump then goes on to call for calm and cooler tempers. “We must get on with the business of America.” He then offers a revisionist history of his attempt to overturn the election results, claiming his efforts were strictly legal.

Then he (finally) admits defeat.

“Now Congress has certified the results. A new administration will be inaugurated on January 20th. My focus now turns to ensuring a smooth, orderly, and seamless transition of power. This moment calls for healing and reconciliation.”

He closes with a message to his fervent MAGA fan base:

“To all of my wonderful supporters: I know you are disappointed but I also want you to know that our incredible journey is only just beginning.”

Trump’s video makes no mention of whether or not he’s still considering pardoning himself, as the New York Times reported earlier. According to the Times, White House Counsel Pat Cipollone warned the president that he could “face legal exposure” for his role in inciting yesterday’s riot.