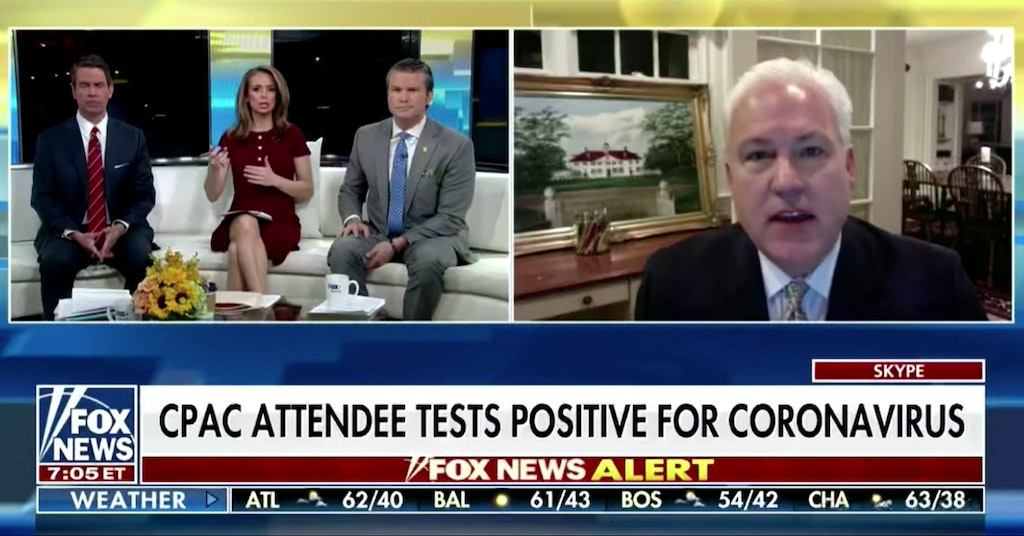 Trump Was Close To Someone Infected With Coronavirus At CPAC


Anyone can get the coronavirus. It’s just a fact. How well they’re treated afterwards, their ability to survive the financial strain of missed work and medical bills, and whether or not they even survive is connected a host of other variable, but the virus is very contagious, poorly contained, and being hushed up by the Trump administration—which means it’s EVERYWHERE. And that includes the Conservative Political Action Conference, where a man who tested positive for coronavirus was in proximity to Donald Trump.

“We had Purell and hand sanitizer stations—I think over 30 of then all over the conference,” Schlapp insisted. “I think everybody was scrubbing down all the time because they realized they were at a very big public event.”

He added, “I can tell you, when the president was on site at CPAC, he lives by what he tells us. Because I saw him scrubbing down his hands and clean his hands more than once while he was on the premises.”

While many people are being gleeful about a potential corona outbreak at CPAC, it should be noted that not everyone at that conference is a Trump supporter, or even wanted to be there. And even if they were, do they really deserve a virus that kills? IMHO, no, they don’t:

the replies to the tweets like this about how it’s “karma” are deeply frustrating given just how many workers — many hourly — have to work events like this, interact with tons of attendees, and may be put in a very tough economic situation if they are forced to quarantine. https://t.co/7Q25AMBrNU

BUT if Trump or members of his administration did get the virus, it could force Trump to change how he’s talking about coronavirus and preparing for it. Right now, his policy seems to be denying that it’s spreading and preventing people from being tested to keep official numbers down, which is a danger to everyone:

This is deadly serious:

Talking about corona-virus this morning, Trump said, "We closed it down. We stopped it."

There were 15 confirmed cases in the US a week ago.

#Corona Yesterday I waited on line for 20 minutes in the rain to get 3 facemasks which the South Korean government is now rationing to prevent hoarding and price gouging. Americans have no idea what’s coming in the next 2 months, and Trump’s shambolic denialism is worsening that pic.twitter.com/gD137JdwiI

It is wrong to hope anyone gets the coronavirus, but maybe a close call will snap Trump back into reality.