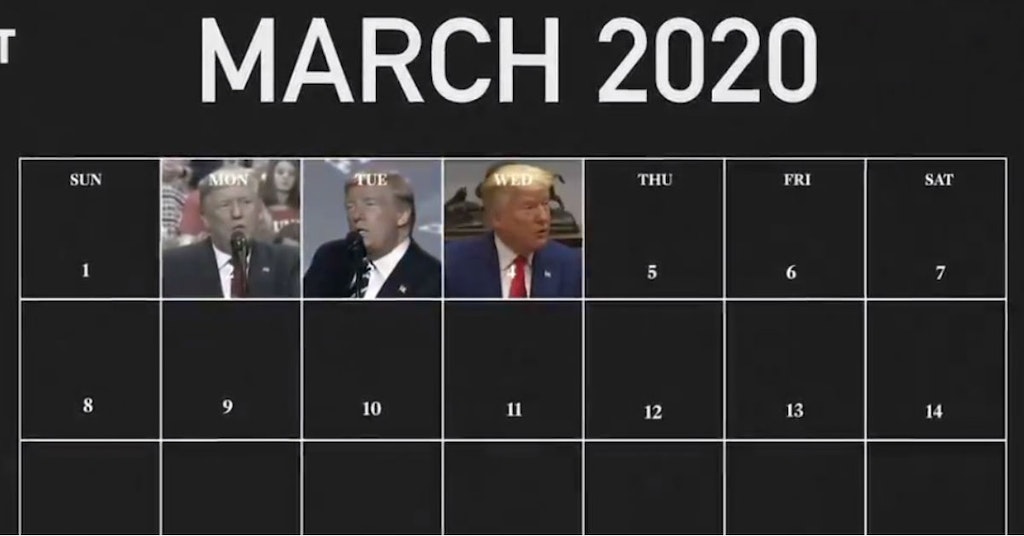 Just about nobody is happy with the U.S. government’s response to the coronavirus pandemic, and people have been pointing out for weeks that Donald Trump’s tone has been changing on a dime as new information arises.

As Trump pivots to coronavirus crisis mode, let’s not forget the months of downplaying and denial. pic.twitter.com/gH1xZAHXm5

The video, made by political news outlet The Recount, uses a simple calendar graphic with videos of Trump speaking on the coronavirus from late January to March 17, when he said that he “felt it was a pandemic long before it was called a pandemic.” Clearly, that is not true.

Blatantly lying to the public when there’s easily-accessible video evidence proving otherwise is, somehow, not a new trick for this president. However, people are just about over putting up with this gaslighting nonsense during a pandemic that could end with literally millions of Americans dead.

MSNBC’s Ayman Mohyeldin also penned a thread pointing out how Trump has consistently downplayed the seriousness of the novel coronavirus, asking journalists to hold him and his administration accountable and “have a memory span longer than a flash.”

Here is Pres Trump in his own words (and tweets) as compiled by the @NBCNews White House Unit.

Read them, save them and don’t forget them so when he says “I’ve always known this is a real pandemic long before it was called a pandemic” you can actually call him out on it

Mohyeldin then lays out in text both the same quotes from the video by The Recount and tweets on the subject of the coronavirus from January 22 to yesterday. Just comparing the first and last is enough to make you want to break quarantine to go out and break stuff (but don’t).

Will this be enough to finally get people to stop putting up with Trump’s constant lying? A quick look through Twitter, where #TrumpPandemic is trending in the top spot for the U.S., seems to suggest so.

Yesterday Trump said he ALWAYS knew it was a pandemic.

If that's true, that means he rejected tests, ignored the advice of experts and let a deadly virus spread into mass fatalities ON PURPOSE.

Here he is on Feb 25 mocking Schumer bc Schumer wanted more than $2.5 billion to prepare for covid-19.

Now he's declared a national emergency and is opening up $60 billion.

(And he didn't have travel closings for all the Americans returning from China)#TrumpPandemic https://t.co/yvDmRGLLOh

If you don't think Trump is responsible for the terrible response to this outbreak, look at all the people who, even now, are spreading memes about it being less dangerous than the flu.

7,837 Americans and counting as of the time of this article’s posting.