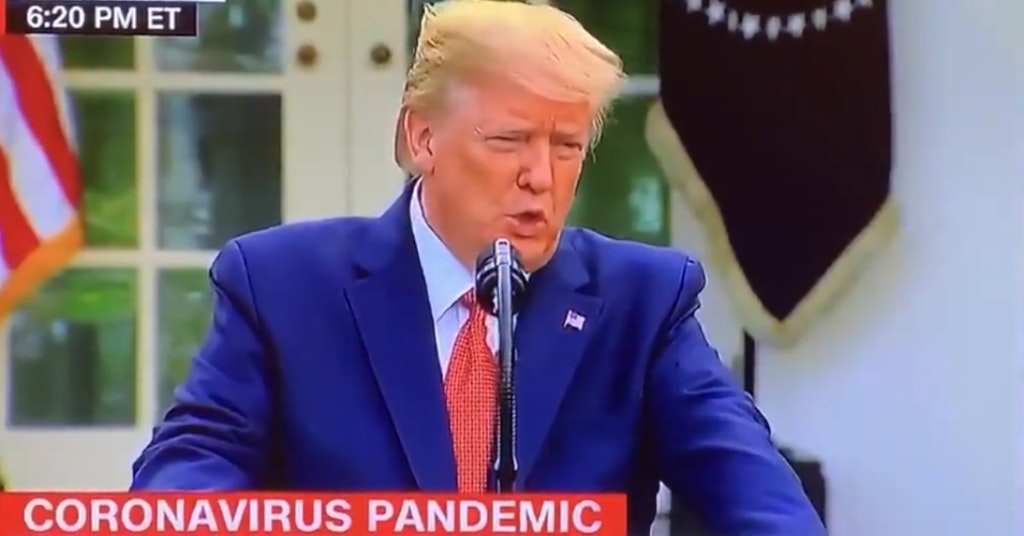 Newly released audio clips from interviews with journalist Bob Woodward appear to prove that Donald Trump was aware in early February that the novel coronavirus was airborne, extremely contagious, and significantly more deadly than the flu. He also admits on tape that he downplayed the severity of the pandemic and intended to keep doing so in March because he didn’t want to “create a panic.”

This was around the time that Trump was claiming the first cases in the U.S. would disappear without spreading across the country as it did and that it was no more deadly than the common flu, which kills around 40,000 people per year rather than over 190,000.

The audio was released just ahead of Woodward’s new book Rage —yet another tell-all about the president which will be available to the public on September 15.

In the clip from February 7, Trump says he discussed the novel coronavirus with President Xi Jinping of China and admitted to knowing that the mortality rate from COVID-19 was around five percent compared to less than one percent for influenza.

“It goes through air, Bob,” he said, referring to the virus being airborne. “That’s always tougher than the touch.”

“It’s also more deadly than your, you know, your, even your strenuous flus.”

Trump then seems to say that he asked if the coronavirus was the “same thing” as the flu, admitting that the new virus is “five percent versus one percent and less than one percent” in terms of mortality rates.

On March 5, Trump said in an interview with Fox News that he had a “hunch” that the death rate from COVID-19 was less than one percent, directly contradicting the WHO’s estimate of 3.4 percent at the time.

“Well I think the 3.4 percent is really a false number,” he said. “Now, this is just my hunch, and, but based on a lot of conversations with a lot of people that do this — because a lot of people will have this and it’s very mild.”

“Personally, I would say the number is way under one percent.”

Two weeks later, Trump admits in another recorded interview with Woodward that he intentionally downplayed the coronavirus threat.

“I wanted to always play it down, I still like playing it down, because I don’t want to create a panic,” Trump said.

Instead, Trump managed to make the U.S. the epicenter of the pandemic, still sitting in the top spot on the list of most cases and most deaths, even ahead of countries with much higher populations like China and India. At the same time, Trump supporters continue to downplay the virus, refusing to wear masks, gathering in large numbers, and creating multiple superspreader events as they go.

According to CNN, Rage is a “brutal assessment of Trump’s presidency” that contains quotes from numerous former White House officials including former Defense Secretary James Mattis and former Secretary of State Rex Tillerson. All of them trash Trump in various ways, with Mattis calling him “unfit” for the presidency and former Director of National Intelligence Dan Coats expressing that he is convinced that “Putin had something on Trump.”

Even his son-in-law Jared Kushner reportedly slammed the president to Woodward, saying that you need to read Alice in Wonderland to really understand Donald Trump.

“If you don’t know where you’re going, any path will get you there,” he said, paraphraseing the Cheshire Cat.

By July, Trump was sticking to the line that the coronavirus pandemic and its impact on the U.S. was not his fault.