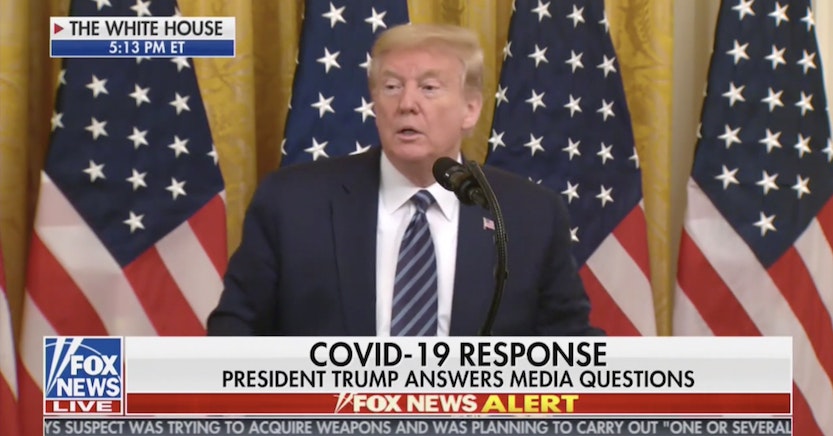 The Trump administration is so transparently desperate to blame anyone else for the federal government’s colossal mishandling of the coronavirus crisis that President Trump has actually been trying to shove the blame for inadequate testing off on former President Obama.

This week, a reporter finally pressed him on the absurdity of his claim.

CNN’s Jim Acosta point-blank asked Trump to explain his position that Obama left his administration “broken tests” for coronavirus despite the novel coronavirus, COVID-19, literally not existing in the world when Obama was in office.

Trump has tried to blame Obama for the slow coronavirus response before.

In March, he tried to blame Obama for the faulty tests from the Center for Disease Control.

“I inherited broken junk,” he claimed later in April.

And that sentiment was the echo of one he had gone on record stating before.

He did use Acosta’s question as an opportunity to continue praising his administration’s response.

Everyone knows by now that Trump essentially lives by the belief that if he repeats a lie often enough, his base will believe it. Unfortunately, that often seems to be true, no matter how ridiculous that lie ends up being.

A quick reminder of just a few of the ways his administration has mishandled the COVID-19 outbreak: tests were slow to roll out, ventilators and personal protective equipment for healthcare workers were not readily available in adequate numbers (plus, the federal government has reportedly been seizing equipment ordered directly by the states for their own use), oh, and there’s that whole thing where Trump himself spent crucial weeks downplaying the threat of coronavirus rather than preparing the country for what was to come.

“We did more tests than any other country in any other world,” Trump claimed inaccurately at the same briefing. “And it’s a higher quality test.”

He also called his administration’s handling of the outbreak “spectacular.”

It comes as no shock that the repetitive lies are draining to the American people.

But no matter how Trump attempts to spin the record, the fact remains that the COVID-19 test was created under his administration, an early version was flawed, and the government still isn’t doing enough testing compared to other countries that are handling things better and decreasing their confirmed cases.

And no, he still hasn’t explained how Obama could possibly be to blame for all of this. Mainly because he literally can’t.