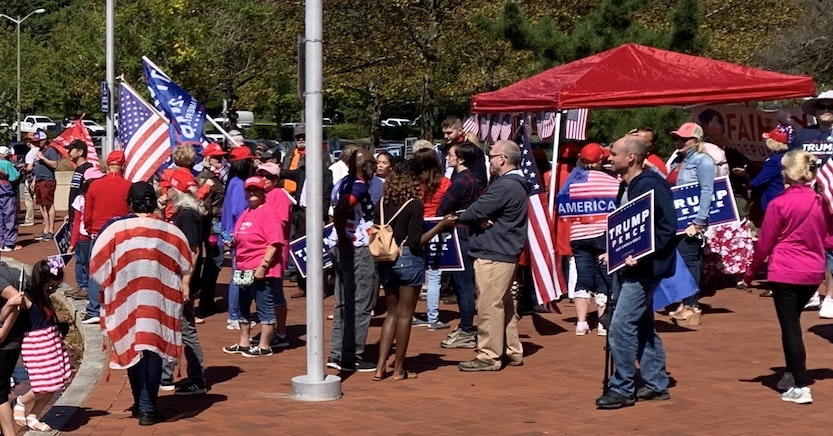 Early voting began in Virginia on Friday, and by Saturday, a rally of Trump voters had already begun trying to intimidate voters in Fairfax.

Video from outside the Fairfax County Government Center, where voting was taking place, shows a large group of the president’s supporters standing outside the building with Trump 2020 signs and paraphernalia, chanting “four more years” at voters waiting in line and approaching the building.

The group gathered elsewhere as part of a “Trump Train,” and video of an organizer speaking to the fanatics prior to their arrival at the polling place shows that their intention was to “tell them who they should go and vote for.”

Fairfax Democrats Chair Bryan Graham said when the group first arrived, they circled the parking lot for around twenty minutes honking and yelling at voters.

The obvious attempt to intimidate voters worked, to an extent, and election officials had to begin escorting people past the group, and open up more of the building to allow voters to wait inside instead of near the demonstrators.

“Citizens coming into and leaving the building did have to go by them,” said Gary Scott, the general registrar of Fairfax County. “Those voters who were in line outside of the building were moved inside and we continued operations. Some voters, and elections staff, did feel intimidated by the crowd and we did provide escorts past the group. One of the escorts was the county executive.”

Trump has repeatedly insisted that Democrats are going to play dirty and steal the election, potentially radicalizing his base to take part in incidents such as the one in Fairfax.

The president has previously stated that he wants armed guards and other law enforcement monitoring the polls (which is illegal), has told his own supporters to vote twice (which is illegal), and has encouraged Republicans to become poll watchers using an ad telling them to “fight for President Trump!” He has also, of course, gone to great lengths to disparage mail-in voting.

So it’s no surprise that his base would show up en masse near a polling center, and it’s unlikely to be the only time it happens during this deeply divisive election.