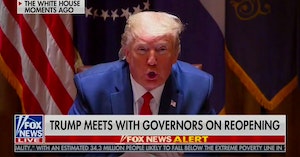 President Trump and Dr. Anthony Fauci are butting heads yet again, this time over Fauci’s suggestion that businesses and schools won’t be ready to fully reopen anytime soon.

“I was surprised by his answer, actually,” Trump told reporters. “It’s just, to me it’s not an acceptable answer, especially when it comes to schools.”

This week, Fauci stood before the Senate and testified that it would be unwise for all schools to reopen in the fall, fearing such a move would be too soon without a vaccine.

“The idea of having treatments available or a vaccine to facilitate the reentry of students into the fall term would be something that would be a bit of a bridge too far,” he said. “As I mentioned, the drug that has shown some degree of efficacy was modest, and it was in hospitalized patients, not yet, or maybe ever, to be used…as prophylaxis or treatment.”

Fauci is one of the nation’s leading experts on diseases, and is an integral part of the White House’s coronavirus response team. But he and Trump have been constantly disagreeing over everything from measures that need to be taken to protect the public to how long our cautious state of existence could last.

His concern over the potential for states to reopen so soon is based on a fear of a new wave of outbreaks, as is beginning to be seen in other countries that were hit by COVID-19 before the United States. Such an occurrence could dramatically increase the death toll and hurt the economy, the thing the GOP seems most concerned about.

But Trump continues to be more interested in focusing on what his base wants to hear — that everything is fine, and we’ll be back to business as usual any day now.

“We’re opening our country,” he said. “People want it open. The schools are going to be open.”

Trump may be taking his lead from Fox News’ response to Fauci’s comments.

Tucker Carlson in particular went on a rant against Fauci, calling him a buffoon and suggesting that Democrats are pushing for him to be “dictator for the duration of this crisis,” a laughably baseless claim.

Attempts by Fox News and the more extreme Trump acolytes to dismiss Fauci’s expertise continues to be a point of contention.

A poll conducted at the end of April showed only 14% of Americans think it’s a good idea for schools to reopen soon. Only 32% were ready for people to return to work, and just 19% wanted restaurants open for dine-in service. Additionally, a recent CNN poll found that 67% of Americans trust Dr. Fauci’s coronavirus information while only 36% say the same about Trump.

So while the GOP continues to push the idea that the majority of Americans want everything opened back up, polling, along with anecdotes, tell a dramatically different story—one where citizens are desperate for the federal government to listen to science.

Trump previously retweeted a comment on Twitter calling for Fauci’s dismissal. Many fear that as the two continue to publicly clash over such serious issues, and as Fox News and his supporters goad him on, Trump will indeed fire Fauci and the country will move even farther away from the fact-based response to this pandemic that we so desperately need.

But it certainly wouldn’t come as a surprise.