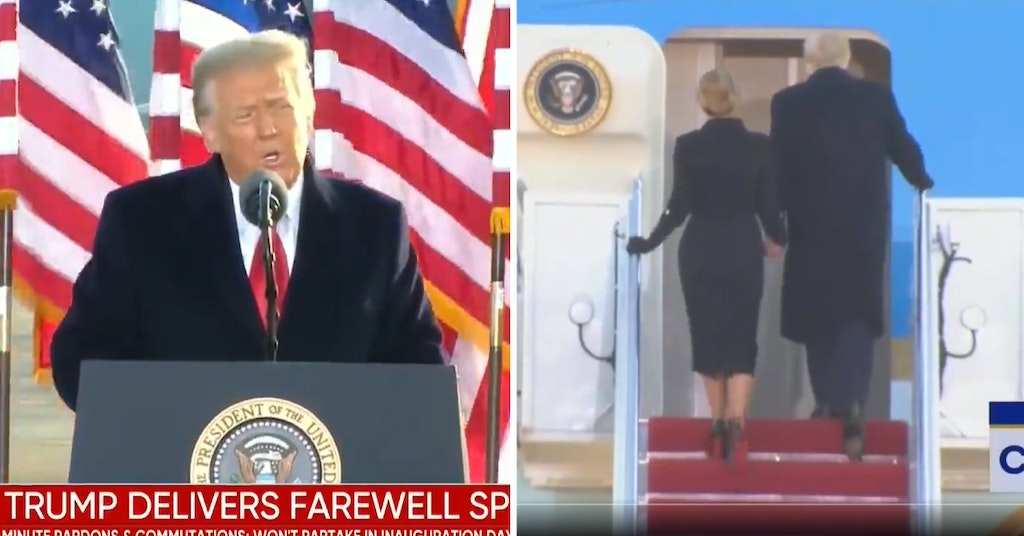 Donald Trump gave his final presidential speech this morning at the Joint Base Andrews to a crowd of his (mostly maskless) supporters, arriving to the tune of “Don’t Stop Believin” by Journey.

Trump’s aides reportedly wrote him a gracious speech encouraging a peaceful transition of power and containing traditional references to the incoming administration, but the now ex-president threw it out.

Instead, he laid the foundations for taking credit for everything Joe Biden does and ended the speech with big yearbook-signing “have a nice summer” energy.

“I wish the new administration great luck and great success, and I think they’ll have great success,” he said. “They have the foundation to do something really spectacular.”

He also told the crowd that he would be ready to deliver a future “I told you so.”

“I hope they don’t raise your taxes, but if they do, I told you so,” he said.

Trump did manage to largely refrain from again claiming that the election was stolen from him, but made a promise that might send quite a few chills down spines: “We will be back in some form.”

After touting the various things he considered to be accomplishments during his four years as president, he concluded with a line definitely not written by a presidential aide but might be said at the end of a rough family reunion.

“Have a good life. We will see you soon.”

In one final bit of presidential hilarity, Donald and Melania Trump climbed the stairs to a plane that is not Air Force One to the tune of one of his all time favorite songs: YMCA.

And that’s all, folks. No more President Donald Trump. Have a good life.