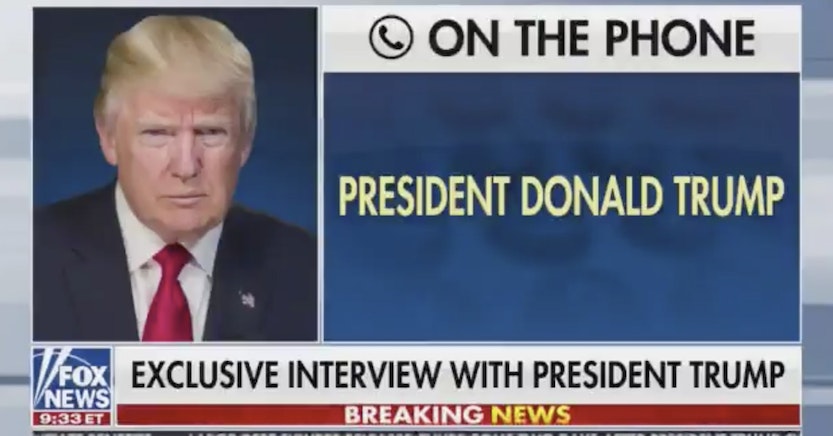 In the midst of questions about his health and Coronavirus test results, President Trump launched into a bizarre rant on Fox News on Thursday. While that doesn’t really feel like news anymore, Trump’s latest topic of interest shows his mind is not exactly focused at the moment.

Speaking with Sean Hannity about the Green New Deal, Trump, who had difficulty speaking at times, began talking about the fish in California, saying that California would have to ration water because they send water to the sea to “take care of certain little tiny fish.”

“California is going to have to ration water. You know why? Because they send millions of gallons of water out to sea, out to the Pacific, because they want to take care of certain little tiny fish that aren’t doing very well without water, to be honest with you. But it’s a very sad thing that’s happening.”

In the past, Trump has made fun of California Democrats for their efforts to protect wildlife, particularly a small, endangered species of fish called the delta smelt. Due to a drought that lasted from 2011 to 2017, the fish were nearing extinction. The Trump administration has made moves to roll back protections for the fish to direct the water to farmers.

Folks on social media were confused about the fish comments—and noticed that Trump dodged questions about whether or not his latest COVID-19 test was negative.

Trump has been filming videos despite being sick with the contagious virus, allegedly still on steroids and seemingly feeling invincible. You can hear Trump coughing during his interview.

Trump also announced his plans to hold a rally in Florida on Saturday. Trump insists he is fully recovered from coronavirus after receiving treatment from the pharmaceutical company Regeneron.