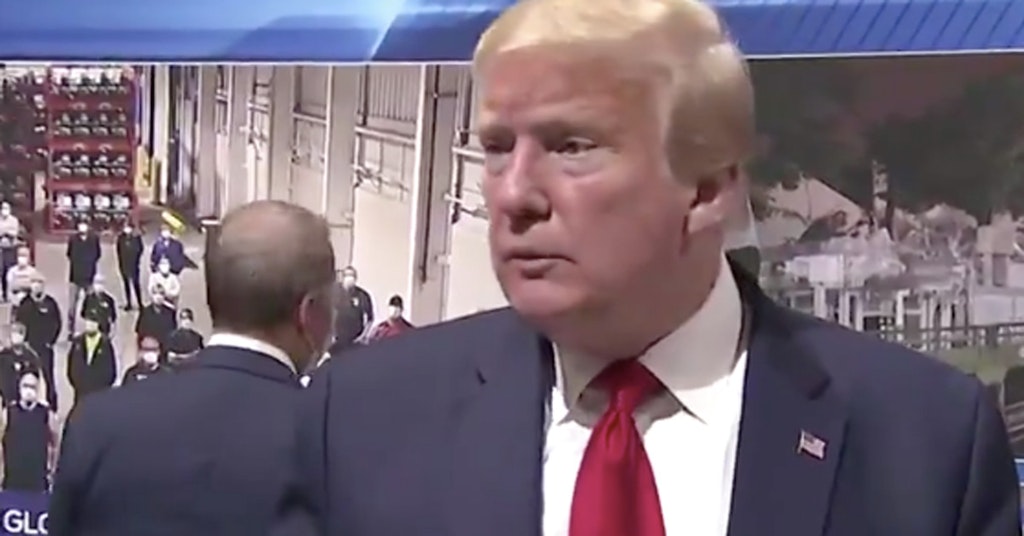 Great leaders are supposed to set an example for the people around them. In a time like this, that presumably means showing empathy for the people suffering around the world, and demonstrating proper safety measures so as to help keep others from getting sick. That’s what a true leader would do. But unfortunately, some of us are stuck with Donald Trump.

The President of the United States toured a Ford manufacturing plant this week that has been converted to producing ventilators, and not only did he refuse to wear a mask, but when questioned about it, he used it as an opportunity to slam the media covering the event.

“I didn’t want to give the press the pleasure of seeing it,” Trump said, after claiming he had worn a mask in a different part of the facility but decided to take it off before being around more people.

Trump has repeatedly refused to be seen wearing a mask.

It was only two weeks ago that the president toured a mask making factory without wearing a mask himself. And he gave the same hard-to-believe excuse then that he gave at Ford: he was totally wearing one, just not while he was any place the press could actually see him.

This all comes at a time when studies have shown that men are less likely to wear masks to help slow the spread of COVID-19 because they see them as a sign of weakness.

Ford says they asked Trump to wear a mask.

“Bill Ford encouraged President Trump to wear a mask when he arrived,” the company said in a statement to TIME. “He wore a mask during a private viewing of three Ford GTs from over the years. The President later removed the mask for the remainder of the visit.”

Ah, so the cars were protected against COVID-19, but forget about it when there are actually more people around. Got it. That makes perfect sense.

Ford spokeswoman Rachel McCleery had previously said that company policy is for everyone to wear personal protective equipment, but the company seemed to anticipate Trump may not comply.

“The White House has its own safety and testing policies in place and will make its own determination,” she added.

…before he took it off for the cameras.