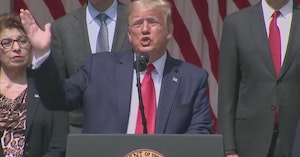 This morning, Donald Trump walked into the Rose Garden in the heavily gated compound the White House has become and declared it was great day for George Floyd.

“Equal justice under the law must mean every American receives equal treatment in every encounter with law enforcement regardless of race, color, gender or creed. They have to receive fair treatment from law enforcement,” the President said as protests and civil unrest continued for the tenth day in a row.

The killing of George Floyd has sparked hundreds of thousands of people to take to the streets to protest police violence against the Black community. George Floyd’s killer, Derek Chauvin, faces second-degree murder charges. The other three police officers present during the more than eight minutes when Chauvin kneeled on Floyd’s throat—Tou Thao, Thomas Lane and J. Alexander Kueng—were charged with aiding and abetting murder.

Trump’s Rose Garden appearance was intended to be a jobs report. Though the unemployment rate is still on par with what the nation experienced during the Great Depression, Trump spoke victoriously.

Ignoring the main point of the protests, Trump declared that an economic rebound “is the greatest thing that can happen for race relations.” And when PBS reporter Yamiche Alcindor asked Trump how such low numbers can even be considered a victory, he apparently shushed her.

Trump then went back into the White House.