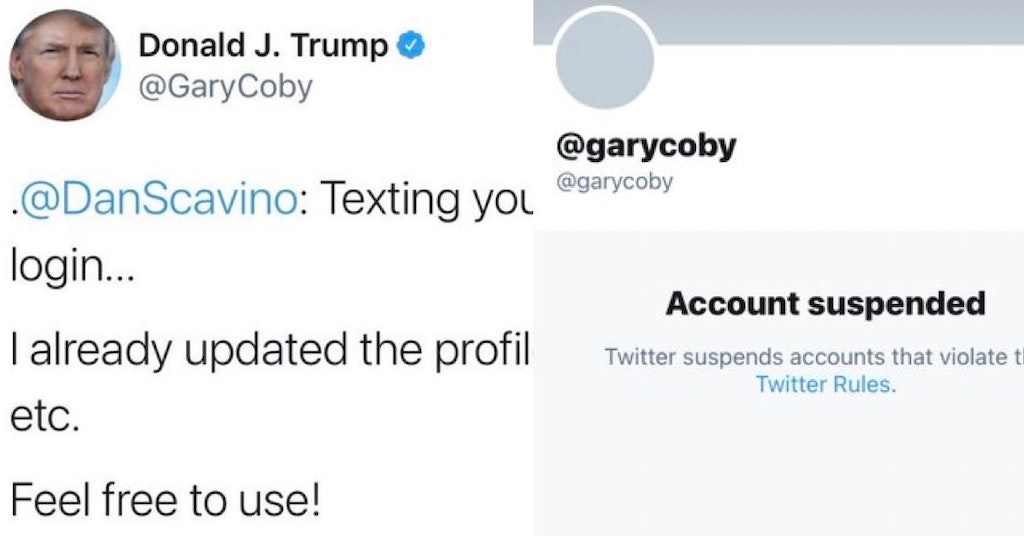 Trump Gets Caught Trying To Evade Twitter Ban And Shut Down


On January 6th, Donald Trump supporters swarmed the Capitol building, breaking in past police, and ransacking whatever they could reach. The riot ended with four of his supporters dead and one officer died a day later from injuries sustained during the altercation. After years of ignoring Donald Trump and the way he incites violence all over the U.S., Twitter suspended him.

It was a brief time out, during which he released a tape that some compared to a "hostage video" in which he conceded the election. As soon as he was able to access his account again, his tune changed, and he said he wouldn't be at the inauguration. And then, just like that, he was suspended permanently.

Well, Twitter is basically the blood in Trump's veins, so he quickly scrambled over to the @POTUS handle, which in office presidents can access, and started tweeting about censorship:

"As I have been saying for a long time, Twitter has gone further and further in banning free speech, and tonight, Twitter employees have coordinated with the Democrats and the Radical Left in removing my account from their platform, to silence me — and YOU, the 75,000,000 great patriots who voted for me ..." he tweeted. "I predicted this would happen. We have been negotiating with various other sites, and will have a big announcement soon, while we also look at the possibilities of building out our own platform in the near future ... We will not be SILENCED!"

He also suggested he'd be building his own platform, which I'm sure will be an absolute mess. Those tweets were deleted.

Not seeming to understand that Twitter can see all of his tweets, too, Trump kept going and apparently tanked his campaign account, @TeamTrump:

And his digital director @GaryCoby's account was suspended as well:

It's like Twitter is playing Whack-a-mole on the president. He has also been banned on Facebook and Instagram indefinitely. It all feels like way too little way too late, but it's also satisfying to imagine how much he's suffering. This is probably one of the few things that have actually hurt him in awhile.