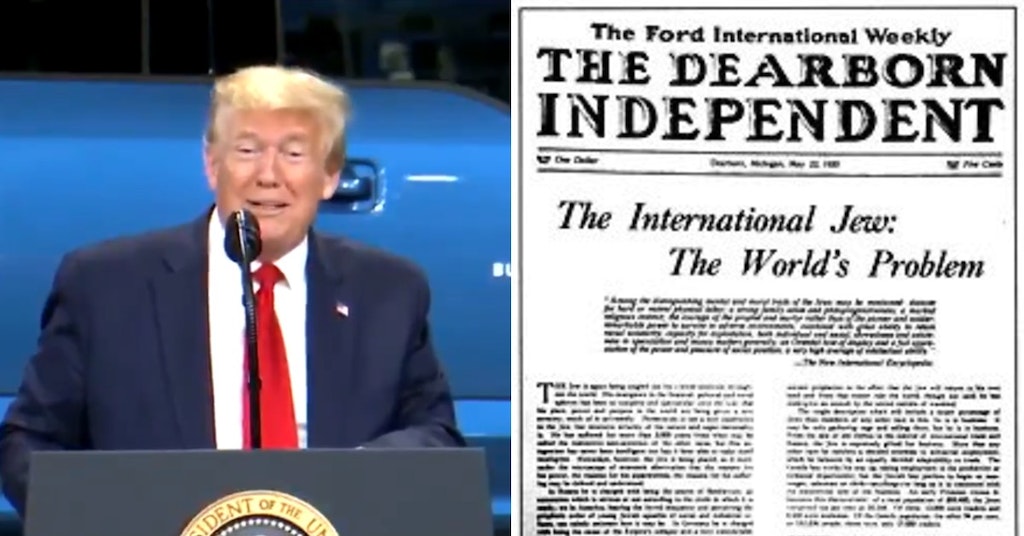 Trump Blasted For Praising The “Good Bloodlines” Of Henry Ford

Donald Trump is being slammed for yet another weird statement during a speech at a Ford Motor Company plant he was touring on Thursday. While talking about the car company, Trump praised founder Henry Ford for having what he called “good bloodlines.”

“In our lifetimes, the company founded by a man named Henry Ford―good bloodlines, good bloodlines―if you believe in that stuff,” he said before looking at executive chairman and great-grandson of the founder William Clay Ford. “You got good blood.”

The President says the founder of Ford has good bloodlines.. If you’re not familiar with Henry Ford, I would encourage you to read more about him and specifically his actions during WW2 pic.twitter.com/vniaOSR2sX

This is probably the worst thing you could possibly say to praise Henry Ford, who was notorious for his antisemitism, which was so intense that his hateful writings attacking Jewish people were admired and praised by the Adolf Hitler. It doesn’t take a self-described genius to know that you shouldn’t speak positively about the “bloodlines” of a person like that.

Even Ford Motor Company has distanced itself from the image of its founder because everyone knows what a raging bigot Henry was.

This is somehow not the first time that Trump has cozied up to white supremacists in a speech. Everyone remembers the infamous “good people on both sides” comments following the 2017 neo-Nazi rally in Charlottesville.

Don’t forget that ex-wife Ivana Trump said that the president had a copy of My New Order, a collection of Hitler’s speeches, in a cabinet by his bed, and witnessed him reading it on multiple occasions.

Suffice it to say that the overwhelming reaction among people who are not die-hard Trump supporters was negative, with some, including prominent Jewish organizations, calling his comments an antisemitic dog whistle.

Henry Ford was a Nazi sympathizer who wrote “The International Jew, the World’s Foremost Problem.”

Hitler called Ford an “inspiration” & gave him the highest Nazi medal for foreigners.

When the President of the United States praises "bloodlines" on national TV, I feel the same kind of existential dread and fatigue, the same kind of chest pain as I do when I read accounts of the Holocaust (of which I've been doing a lot for my book). It's…awful.

Trump has believed, for his entire life, in talents flowing through bloodlines, a very, very Nazi-ish philosophy. Talking about bloodlines in reference to Ford is an…odd coincidence.

So now it’s back to Trump praising the “bloodlines” of a pro-Nazi. Because that’s who he is. That’s what he admires. That’s the kind of polluted “thinking” running through his head & gets spoken out loud. Just like the Nazi ideology & it’s adherents who sought a pure Aryan race.

Hi. Jew here. Henry Ford was a raging and unapologetic antisemite. Ford was the owner of a newspaper that ran a series titled “The International Jew: The World’s Problem.” Trump knows exactly what he’s doing when he brings up “bloodlines” in the context of Ford. Disgusting. https://t.co/uqbbDuF5s5 pic.twitter.com/Bge1Qqr6Gl

This is overt racism. Ford unabashedly hated Jews & promoted eugenics.

Anti-Semitism has no place in the White House. I & our campaign for US Congress #VA01 condemn this hatred.