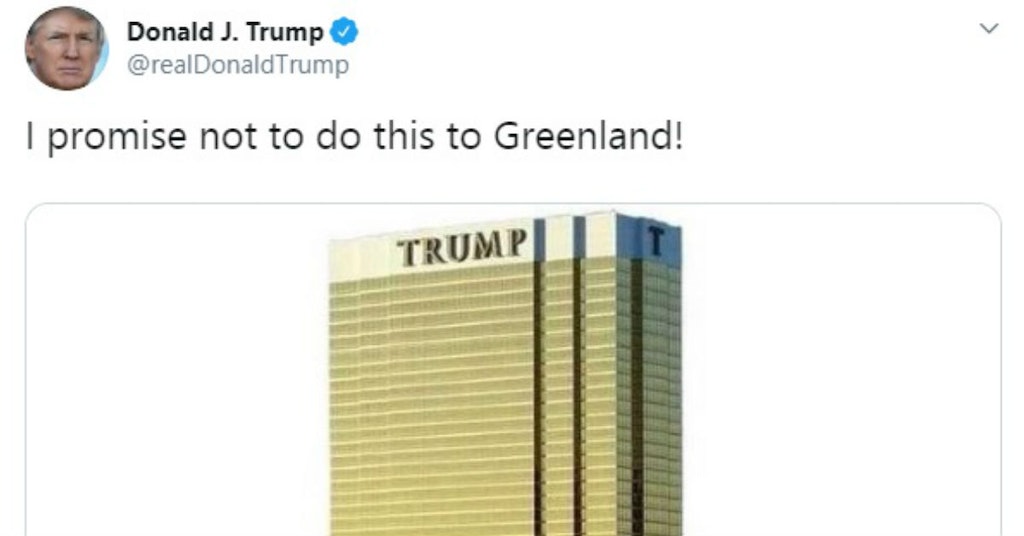 Donald Trump was for some reason still on the bizarre Greenland thing yesterday after reports that his administration was kicking around the idea of buying the country (which is not for sale). He even posted a meme that popped up of a huge golden Trump Tower on a barren beach covered in scattered little houses with the caption “Greenland.” He then added the comment: “I promise not to do this to Greenland!”

Good? And also they wouldn’t let you?

I promise not to do this to Greenland! pic.twitter.com/03DdyVU6HA

Greenland, an autonomous country of the Kingdom of Denmark, has already responded to the idea of being bought by the U.S. with a resounding “no.”

“It’s an absurd discussion, and [Greenland prime minister] Kim Kielsen has of course made it clear that Greenland is not for sale,” said Danish Prime Minister Mette Frederiksen. “That’s where the conversation ends.”

We’re sorry you even had to be bothered with this at all.

On the bright side, the responses from Twitter to the idea of the world’s gaudiest tower being built on a random residential beach in Greenland have been pretty hilarious, especially when you consider the fertile territory that is Trump’s record of bankrupting everything he touches.

Is this the "after" shot from Atlantic City? https://t.co/lTa31hxZRq

Meanwhile, over at the former Trump Plaza Casino… pic.twitter.com/9bPE0XpmRd

Good. Nobody wants to saddled with another one of your bankruptcies. You did enough damage to AC.

The glamor, the flowing lines, the easy grace: Who could resist? pic.twitter.com/ny0VRvXWc8

Why not, you did this to Washington DC ???? pic.twitter.com/9cWyNcM5br