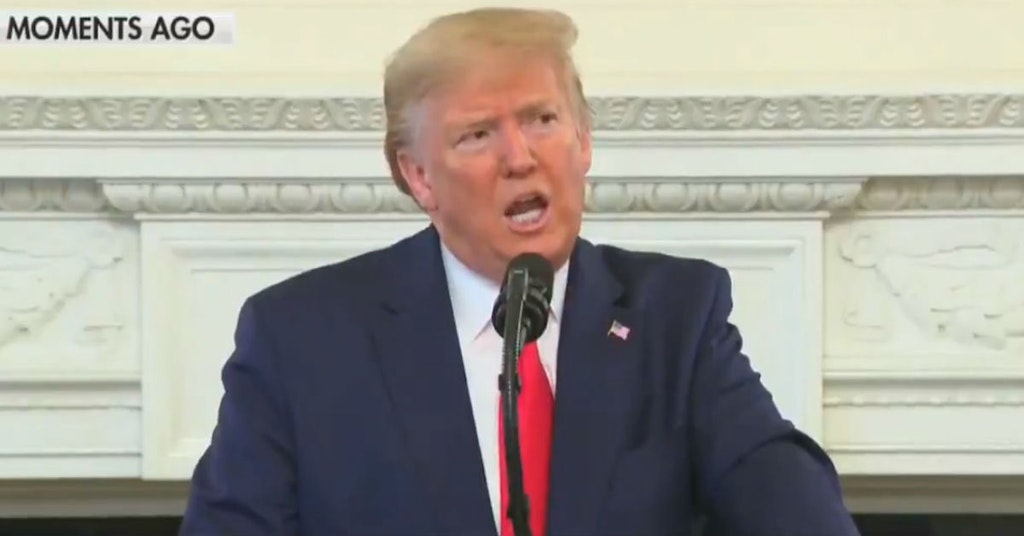 Trump Claims The “Heat” Of April Will “Kill” The Coronavirus

Donald Trump tried to claim that the supposed heat of April will end the coronavirus threat, revealing a deep ignorance about the basics of how viruses work, during a White House meeting with the nation’s governors Monday.

The president touched on a number of issues during his speech, and for some reason came to the topic of the Wuhan coronavirus.

Trump on coronavirus: "A lot of people think that goes away in April with the heat. As the heat comes in. Typically that will go away in April. We're in great shape, though. pic.twitter.com/p4qEGUWB49

“The heat, generally speaking, kills this kind of virus,” he said.

He isn’t wrong about heat killing viruses, it’s just that the temperature needs to get significantly higher than the average nice spring day for a virus to die. The World Health Organization recommends food be cooked to at least 158 degrees Fahrenheit in order to kill the avian flu virus, and it goes without saying that any virus can survive comfortably in the average human body temperature of 98.6 degrees Fahrenheit.

It’s true that the flu season tends to end with the coming of spring as the weather warms and our bodies don’t spend so much energy keeping us warm, but considering the rapid spread of this new virus, it’s unlikely to be stopped by a sunny day.

"I, Donald J. Trump, have literally zero idea what I'm saying all the time."

But Trump doesn’t need to know any of that, because the illness isn’t an American problem. Yet.

The most important thing to understand about viral diseases is that the spread, especially when as contagious as the coronavirus, from 12 to 100 to 1,000 and so on. As the first person in the U.S. has died from the illness and the death toll has already surpassed that of SARS, it might be time

Of course, that was far from the only dangerous and stupid thing Trump said during today’s speech. He also tried to claim that China doesn’t have a drug problem because they execute their drug dealers without asking many questions.

Trump suggests he'd like to model American criminal law on drug dealing on authoritarian systems like China, where dealers are executed: "Countries with a powerful death penalty, with a fair but quick trial, they have very little if any drug problem. That includes China." pic.twitter.com/9WprysjJAX

This is not entirely surprising considering the fact that Trump has repeatedly praised the authoritarian president Rodrigo Duterte for his actions during the Philippine Drug War which has killed over 12,000 people, many of whom were merely accused of being involved in the drug trade.

The common people, who might actually contract the coronavirus, are not happy.

There may never be another human being who has a greater combination of:

Once the heat of April gets here we'll be safe from Wuhan virus but that's when windy season picks up, have to watch out for the windmill cancer.

WTF is he talking about now? It goes away with the heat in April??? This is the kind of misinformation that can cost people their lives. His ego just won't let him be honest for even a minute for the greater good.

Someone tell Trump that he can just not talk about things if he knows nothing about them.