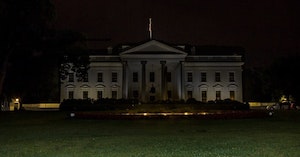 Donald Trump was moved to the White House bunker on Saturday and Sunday night as protests demanding justice for George Floyd and an end to police brutality showed up on his doorstep on both nights. Protesters clashed with the Secret Service, and on Sunday lit fires that could be seen from the White House, including one in the parish house at St. John’s Episcopal Church right across the street.

In response, Trump tweeted out threats of “vicious dogs” and “ominous weapons” and urged governors to use even more violence to suppress protests, which so far has not worked at all. Meanwhile, news of Trump’s hiding has earned him the nickname “bunker boy.”

Trump even encouraged his die-hard supporters to show up to defend him from the protesters, but it looks like none of them did. The only public appearance he made all weekend was to pop down to Florida to watch a SpaceX rocket launch. Melania was not with him, and no one seems to know where she is right now.

Advisors have reportedly been begging the president to stop tweeting out violent rhetoric that only fans the flames, but they’ve been largely ignored. Instead, he once again called the press the “enemy of the people” (a phrase often used by Joseph Stalin), promised to declare “ANTIFA” a terrorist organization in spite of the fact that it is not an organization nor an acronym and simply stands for anti-fascist, and promoted conspiracy theories that most protesters were from “out of state” even though there were protests many U.S. states over the weekend.

Our National Guard stopped them cold last night. Should have been called up sooner! https://t.co/D5vLrHSYcJ

People have been comparing Trump’s response to the actions of previous presidents who faced mass protests, including even former President Richard Nixon, who, in spite of some other very terrible actions, at least sat down with anti-war protesters in 1970 and spoke with them for several hours. Former President Barack Obama also was on the ground and spoke with protesters during the Ferguson protests in 2014.

Trump, however, has not even made a non-Twitter public statement on the weekend protests, and that is apparently because he “had nothing new to say and had no tangible policy or action to announce yet.”

Throughout history great leaders have risen to the challenge.
Donald Trump descended to his bunker.#BunkerBoy

For the first time in history, the president of the United States hid in a bunker from Americans. @realdonaldtrump pic.twitter.com/kr4J3erxmQ

REMEMBER THIS PHOTO ON NOVEMBER 3RD! THIS IS HOW TRUMP RESPONDS TO A CRISIS! HE RAN AND TURNED THE LIGHTS OUT LIKE THE COWARD HE IS!! #BunkerBoy pic.twitter.com/twBMz07dpM

As #BunkerBoy screams at governors that they need to dominate black people and protestors with military might and more unjust persecution, @JoeBiden is listening to and hearing the black community, as they urge him to pick a black female as his VP, address the '94 crime bill, etc https://t.co/7wBZk566j5

Trump is calling governors “weak” but he was the one hiding in a bunker last night. #BunkerBoy

103k dead, pandemic still raging, cities across America burning, National Guard helicopters flying into cities to battle citizens, and #BunkerBoy Trump hiding with the lights out. This is pretty much how I always envisioned year four of a Trump presidency to be.