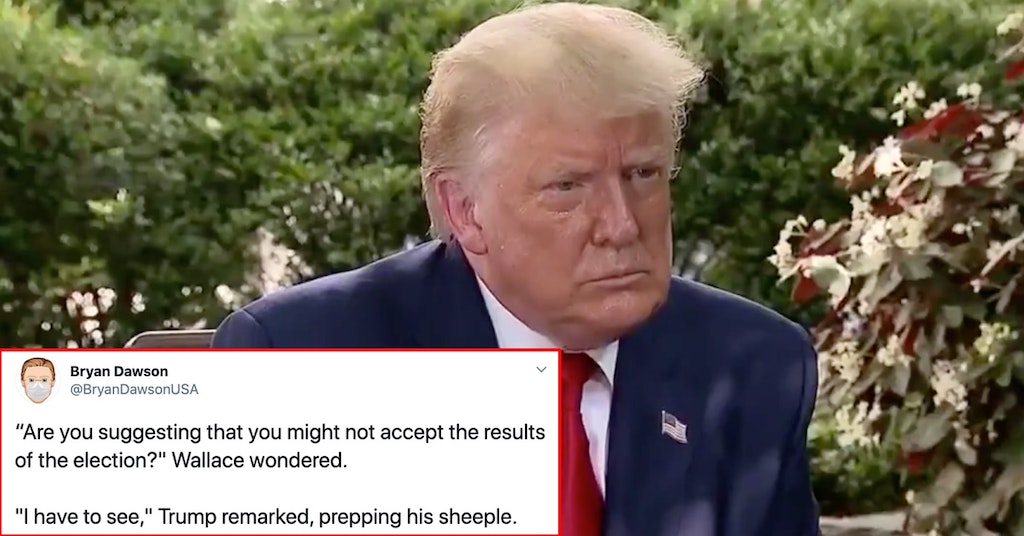 
President Trump has publicly stated that he may not accept the results of the upcoming election, should he not be declared the winner.

In a Fox News interview with Chris Wallace on Sunday, Wallace asked Trump if he considers himself a good loser.

“But are you gracious?” Wallace pressed.

“You don’t know until you see. It depends,” the president replied, before pivoting to one of his favorite unproven talking points. “I think mail-in voting is going to rig the election.”

“Are you suggesting that you might not accept the results of the election?”

The potential for Trump to refuse to accept the results of the election is something American citizens have already been worried about, considering he said something similar (also to Wallace) while debating Hillary Clinton prior to 2016’s election. The difference between then and now is that now Trump is the incumbent, and if he refuses to give up the presidency should Joe Biden (or, if things go as far out of control as they did last time, Kanye West) win the vote, things could get incredibly messy.

And while everyone is hesitant to take the polls as actually predictive of the most likely outcome this November, considering almost all of them showed Hillary winning four years ago, Trump’s complete dismissal of them while Biden is currently leading him by 8% is causing additional concern.

“First of all, I’m not losing because those are fake polls,” he said in the same interview. “They were fake in 2016 and now they’re even more fake.”

The polls, of course, aren’t fake, nor were they in 2016. It’s impossible for the polls to reflect the votes of the entire country, and sometimes, unfortunately, early samples wind up showing a different outcome than we actually get. But if Trump refuses to accept even the possibility of people preferring Biden to him in mere polls, there’s no reason to believe he will accept an actual defeat a few months from now, either.

Biden and Speaker of the House Nancy Pelosi seem convinced that, should Trump lose, he will be removed from office through any means necessary.

But not everyone is similarly convinced.

Trump’s entire interview with Chris Wallace can be seen below: