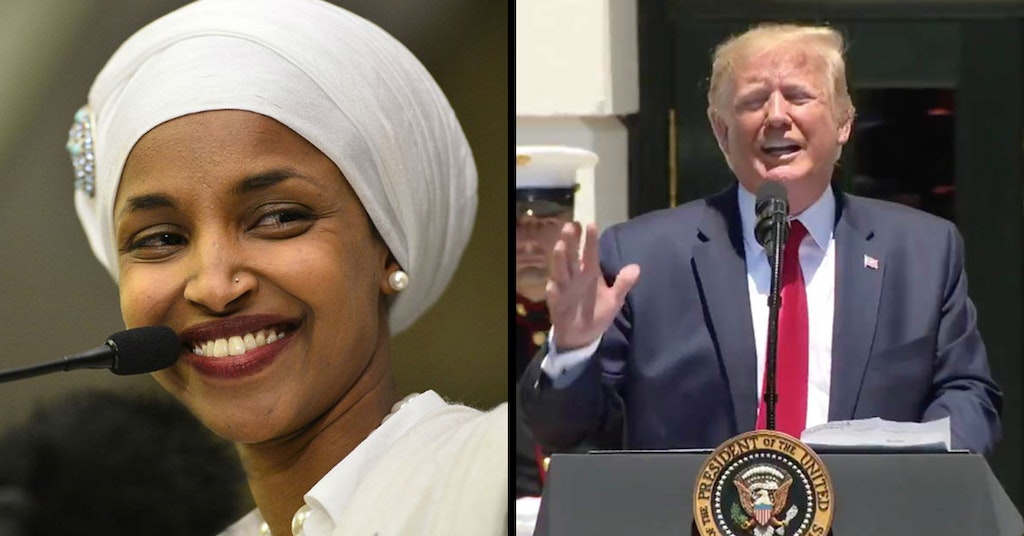 If you thought Trump’s last “most racist rant yet” was racist, get a load of today’s racism. While taking questions from reporters today at a planned “Made in America Product Showcase” event, he intensified his attacks on Representative Ilhan Omar.

Predictably, one reporter brought up the whole thing wherein Trump told a group of women of color in Congress to “go back and help fix the totally broken and crime infested places from which they came,” a statement that self-identified white nationalists have been loving. Also predictably, Trump doubled down.

Trump falsely accuses Ilhan Omar of “speaking about how wonderful al-Qaeda is” in racist rant that represents a new low https://t.co/2j9BLah1Fk

“It doesn’t concern me because many people agree with me,” he said. “And all I’m saying — they want to leave, they can leave. Now, it doesn’t say, ‘Leave forever.’ It says, ‘Leave if you want.’” 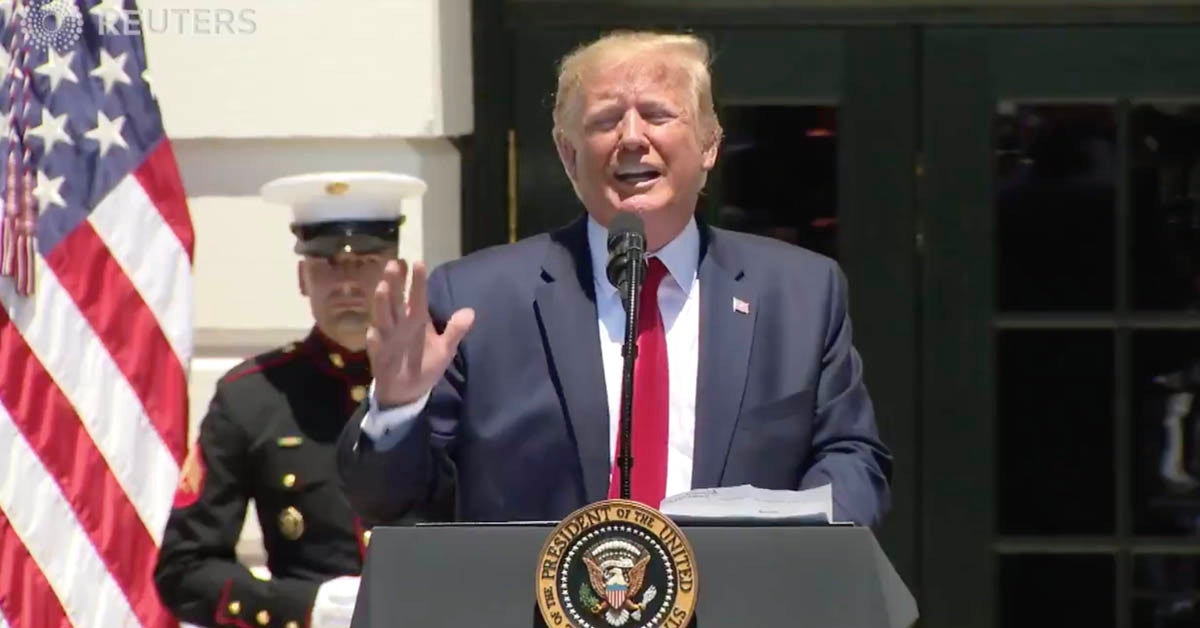 If that wasn’t word-salad enough, he focused his attacked onto Omar, the refugee from Somalia who became the first hijabi Congress member, going so far as to accuse her of hating Jewish people and saying anything positive about Al-Qaeda

TRUMP: “I mean I look at the one, I look at Omar — I don’t know, I never met her — I hear the way she talks about Al Qaeda. Al Qaeda has killed many Americans … these are people that in my opinion hate our country … they can leave … they have to love our country.” pic.twitter.com/ldQhkWJoC8

Omar, of course, does not hate Jews. To say so is as accurate as it is to say she was ever “speaking about how wonderful al-Qaeda is,” which Omar never did. What is true is that Omar gets flooded with death threats every time Trump runs his mouth about her, and that is definitely going to happen again today.

Trump also brought up Lindsey Graham’s characterization of Omar and Representatives Alexandria Ocasio-Cortez, Rashida Tlaib, and Ayanna Pressley as “communists,” saying “they’re socialists, definitely, as to whether or not they’re communists, I think they might be.”

What was the event supposed to be about again?

Trump’s repeated use of Israel to attack these congresswomen and others is not sitting well with the Jewish community in the U.S. and abroad, to the point that “Israel” is trending today with hundreds of thousands of tweets.

Using Jews and Israel to justify racism against WOC doesn’t make you an ally to Jews. It makes you antisemitic and racist. Stop pitting marginalized groups against each other.

Anti Defamation League condemns Trump's use of Israel/Jews as a shield. pic.twitter.com/RciHrItSjL

Trump double and triples down on calling for Black female members of Congress to go back to Africa- Why aren’t we hearing any denouncement by the GOP? And now that Trump has brought Israel into why is Benjamin Netanyahu silent on this hate? Ahhh, we all know why. #Racism

You don't care about Jews, @LindseyGrahamSC. You care about reinforcing white supremacy & the status quo, so you attack progressive leadership & try to divide us.

Our Jewish community is having none of it. https://t.co/f8rM62uTMs

Many are simply concerned for the safety of Omar and the other women Trump continues to attack.

Donald Trump is calling for @Ilhan's assassination. We need to protect her.

“When I think of Al-Qaeda I can hold my chest out,” Trump, during the presser, claimed Omar had said. (She didn’t.)https://t.co/P2M0t6eEsQ#RacistPresident

Ilhan Omar never praised Al-Qaeda. Trump is PURPOSELY trying to get her killed. Millions, unfortunately, believe every vile and lying word out of his mouth. Impeach. Him. Now.#RacistPresident #RacistInChief

How long before one of Trump’s idiot supporters tries to harm Omar or AOC?

This is dangerous rhetoric. https://t.co/DKk98RkjJt

These are straight-up lies and stochastic terrorism. He’s targeting her. Again. Inciting somebody to attack her.

@SpeakerPelosi it is time to impeach. The president is going to get a congresswoman killed.

But mostly, people are just wondering how far the racism can go before Trump is struck by lightning mid-sentence.

Trump targeted AOC, Tlaib, Pressley and Omar with 'go back' tweets that ripped the band-aid off any reassuring notions the U.S. had about the progress of civil rights and the withering of racism. https://t.co/GlroCc4j2o

Chuck Schumer on Senate Floor says Trump’s tweets on Reps. Omar, Tlaib, Ocasio-Cortez & Pressley “drip with racism” & adds “my Republican friends he is not backing off, where are you?” & says GOP is “making a deal with the devil.”

BREAKING: Trump’s lying on tv right now, more than usual. He keeps saying AOC, Tlaib, Pressley, Omar and Dems are all supporters of al Qaeda. Trump is a pathetic racist liar. And he’s going to tell more gross lies like this. Shame on every complicit Repub. They let this happen.

Trump is giving a statement right now saying the female congresswomen he targeted in his racist tweet "hate our country with a passion," and that Rep. Omar regularly praises al Qaeda.

This is completely unhinged and untrue, and it's insane that not one Republican will decry it.

JFC. What will it take? #ImpeachmentInquiryNow

Is Trump still buddy-buddy with Saudi Arabia? Asking for an ally.