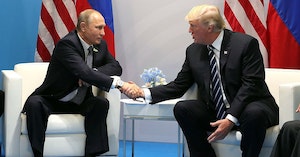 Photo via Kremlin.ru/Wikimedia Commons (CC BY 4.0)

Lawyers for the House Judiciary Committee are making the case that Donald Trump could be impeached yet again if they’re able to obtain new evidence of obstruction of justice from former White House counsel Don McGahn, who famously nearly resigned after Trump told him to fire Robert Mueller. He was also the guy who complained to White House chief of staff Reince Priebus that Trump was asking him to “do crazy sh*t.”

Trump could be impeached a 2nd time if the House obtains new evidence of obstruction from former White House counsel Don McGahn https://t.co/ykOFMOlmnT

Democrats have been seeking McGahn’s testimony for months but have been blocked by the White House, even instructing him not to comply with a subpoena during the Mueller investigation back in May. Now, the Justice Department is arguing that his testimony is no longer necessary, but the House committee doesn’t agree, saying that it’s “relevant to the Committee’s ongoing investigations into Presidential misconduct and consideration of whether to recommend additional articles of impeachment.”

This is what they argued in a court filing to a Washington D.C. circuit court. If successful, they could open up a whole new round of impeachment proceedings. Democrats have reportedly been probing this impeachment angle for a while, but it received little attention after the Ukraine quid pro quo scandal.

“If McGahn’s testimony produces new evidence supporting the conclusion that President Trump committed impeachable offenses that are not covered by the Articles approved by the House, the Committee will proceed accordingly — including, if necessary, by considering whether to recommend new articles of impeachment,” the committee lawyers concluded.

0f course this is right. With a president who knows no bounds, impeachment is a gift that keeps on giving. https://t.co/4G7GJNPBzQ

Republicans have widely attempted to claim that the Mueller case is settled and that it exonerated Trump. This is not true, as the case is still open and ongoing and the investigation phase was only the first part of it. Mueller also did not exonerate Trump and explicitly wrote that although he felt he could not press charges on a sitting president, he also could not say that Trump had not obstructed justice.

The D.C. circuit court will begin considering the case on January 3.