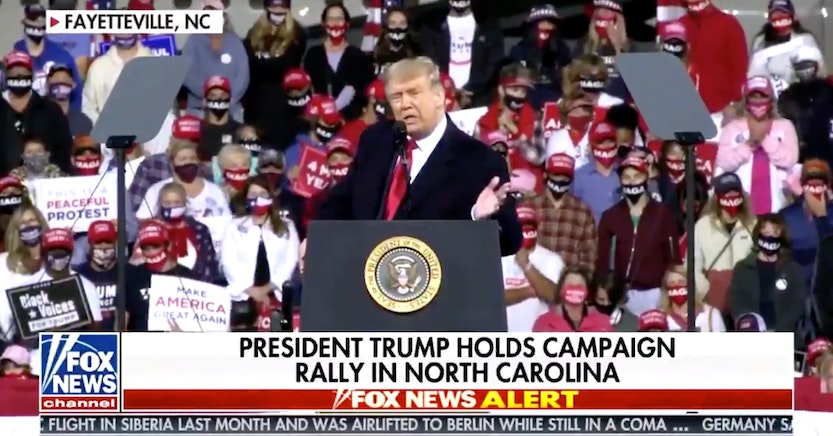 As if we needed anymore signs that the United States is quickly slipping into fascism, President Trump “joked” with supporters at a rally over the weekend that he might sign an executive order preventing Joe Biden from taking office.

“You can’t have this guy as your president,” he told supporters gathered in Fayetteville, North Carolina on Saturday. “Maybe I’ll sign an executive order: you cannot have him as your president.”

During the same event, Trump also referred to Biden as “the worst candidate and the dumbest of all candidates,” and insisted that prior to COVID-19, “we were winning by so much we could’ve called off the election.”

While his supporters are calling the threat to prevent Biden from becoming president nothing more than a joke, it’s one in a line of many comments made by Trump that have people genuinely concerned he will refuse to leave office.

For starters, he has blatantly said that he won’t commit to accepting the results if he loses. He has also made repeated and baseless claims that Democrats are trying to steal the election, to prime his supporters to refuse to accept the results as well. And there’s also the “joke” Trump keeps making over and over again where he suggests he deserves a third term in office because he thinks people were mean to him.

Still, people have been pointing out that Trump, of course, has no authority to sign an order preventing Biden from becoming president.

But Trump and his administration have proven again and again throughout this presidency that if they don’t like a law, they just ignore it.

While refusing to leave office or blocking Biden from taking it would be a step above some of the laws they’ve casually ignored, plenty of people still believe we would be remiss not to take any threat of authoritarianism made by Trump seriously.

But either way, this type of comment is a signifier of how American politics have devolved in just these short four years.