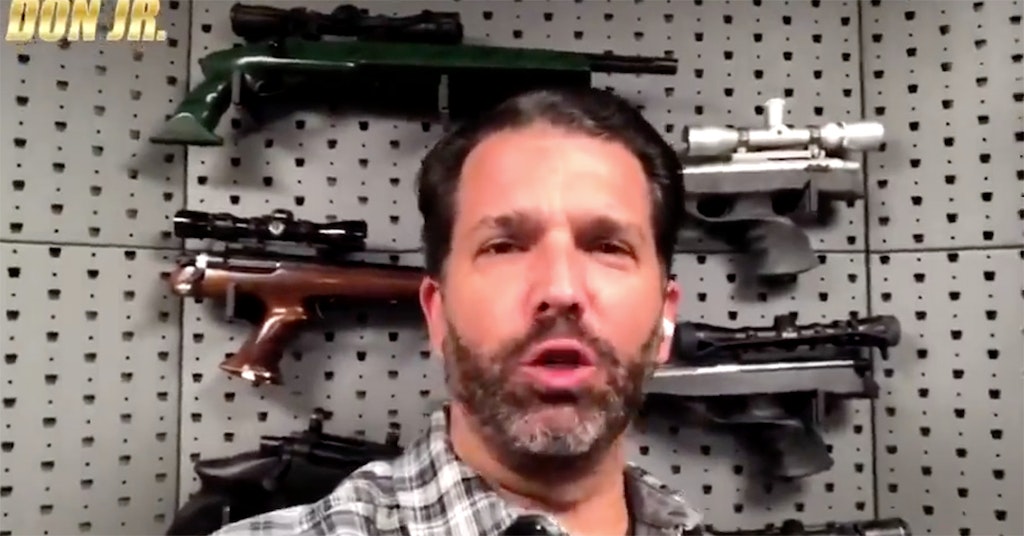 Don Jr. Gave A Bizarre Rant About Teachers In Front Of A Wall Of Guns


Donald Trump Jr. is making a series of videos in which he opines on various topics; on Saturday, he railed against teachers’ unions and the debate over reopening schools after the pandemic—in front of a wall of guns.

The latest Junior video to get attention is raising eyebrows due to the implicit threat that a wall of guns presents.

Vox journalist Aaron Rupar noted, “This looks and sounds like an extremist video posted from a bunker of undisclosed location.”

Monica Lewinsky found cause for alarm in the rant, noting, “Here’s what i find really disconcerting given the insurrection of 6 Jan: [In] this last week, Rep. Boebert had guns prominently displayed in the background and now this. What’s his face is going to speak at CPAC.”

(Indeed, Trump Jr. is slated to speak before the annual conservative convention this coming Friday, presumably not in front of a wall of guns.)

Lewinsky added, “I hope the @fbi is paying attention to this.”

The video is captioned, “The teachers [sic] unions are out of control & are destroying our kid’s futures!”

It begins with a gruff admonition to “follow the science” and seems to claim that teachers and teachers’ unions aren’t doing that, although social distancing and lockdown measures have been advocated throughout the pandemic by those following science-informed public health guidelines.

People on Twitter found a variety of ways to dunk on the former President’s offspring.

Kim Zimmerman questioned his assertion that teachers’ unions are “failing our children,” observing, “His kids don’t go to public schools. I guarantee he can’t name a single teacher in a public school, who is not working their butt off to teacher other people’s kids.“

She added, “Speaking of failing kids, when did he last see his?”

Ryan Baker noted the wall of guns is reminiscent of notorious terrorist Osama bin Laden, noting, “Bin Laden is looking up from hell thinking maybe Junior should take it down a notch with the guns in frame.”

Activist Fred Guttenberg stated, “The person who murdered my daughter was a trump supporter. With this video aimed at teachers and with guns in the background, it looks to me like @DonaldJTrumpJr is actively encouraging future shooters like him and future school shootings. This family is a virus on our nation.”

Matt Oswalt wondered aloud why guns were being displayed in this manner by both Trump Jr. and Boebert. “I’ve never understood why people display guns like this, as if they made them in their garage or whittled them on their front porch,” he commented. “You got them at Bass Pro Shops. Are we supposed to be impressed? I bought thermal socks there once but I didn’t nail them to my fucking wall.”

And finally, John Cates questioned whether they were even real guns, observing, “Also they look like paint ball guns. Or video game accessories. Is that the point? I never know.”

Judging from the video, Trump Jr. also appeared to not know the point.