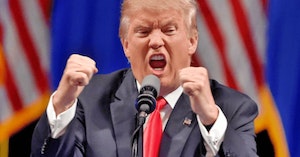 In his latest tantrum, Donald Trump has his campaign send a cease and desist letter to CNN President Jeff Zucker demanding that the network retract and apologize for a poll that shows Trump lagging far behind his Democratic opponent Joe Biden. CNN says that they “immediately rejected” the letter and said that they stand behind the recent poll, which shows Trump losing to Biden by 14 points, 55-41 percent.

The poll also put Trump’s approval rating at 38 percent currently, which they point out is about the same rating suffered by one-term presidents like Jimmy Carter and George H.W. Bush just a few months before they lost their re-election bids.

The letter accused CNN of trying to mislead voters and stifle enthusiasm for Trump’s campaign.

Following the cease and desist demand, Trump tweeted that he’s “retained” a polling company to “analyze” the CNN poll because he “felt” it was “fake.”

I have retained highly respected pollster, McLaughlin & Associates, to analyze todays CNN Poll (and others), which I felt were FAKE based on the incredible enthusiasm we are receiving. Read analysis for yourself. This is the same thing they and others did when we defeated…

Poll analysis publication FiveThirtyEight gave McLaughlin & Associates a C/D rating in their project that analyzed and graded a long list of pollsters, giving them a 70 percent accuracy score in calling elections correctly and showing them skewing conservative. CNN also provided a substantial list of other polls that found results similar to theirs, with Trump losing by double digits.

Additionally, CNN goes into detail as to why the accusations leveled in Trump’s letter are inaccurate and misleading.

“McLaughlin says CNN’s survey is a ‘skewed anti-Trump poll of only 25% Republican.’ That percentage of respondents, however, is consistent with several other major polls that use live telephone interviews, which provide the most reliable snapshot of the race,” the CNN article explains. “McLaughlin this week argued that pollsters should include a third of Republicans in surveys to reflect the 33% that they represented in the 2016 vote, but exit polls nearly always have higher shares of partisans and lower shares of independents than pre-election phone polls.”

With that out of the way, it’s time to mock Trump for being a giant baby.

They better send out some more letters. pic.twitter.com/VVYFDSPO4t

Trump is so fragile that he needs to hire his own team of pollsters to try and convince himself that he’s not really getting “dominated” by Joe Biden.

Trump is such a snowflake!

I wonder if Trump has also retained the legal services of Dewey Cheetum and Howe.

“McLaughlin is known in the industry as someone who sometimes tells his clients what they want to hear rather than what they need to hear, say multiple Republicans who’ve worked with him on past races.”https://t.co/iKXeZQp5Bb

Anything can happen so don’t get cocky, but feel free to enjoy Don’s squirming in the meantime.