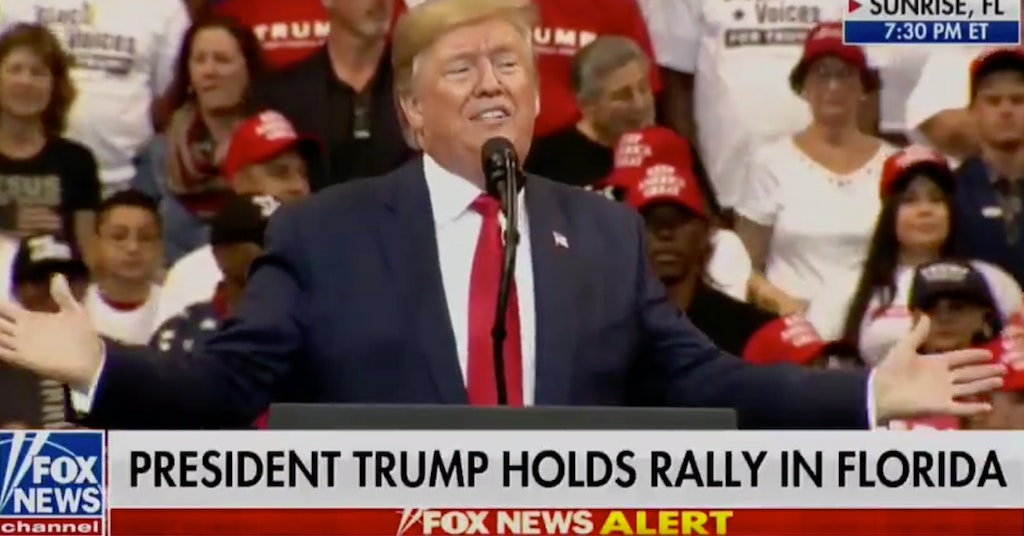 It’s the holiday season again, which means that conservatives are frothing at the mouth over the idea that somewhere, someone isn’t saying Merry Christmas to a customer at Walmart. The alleged “War on Christmas” has been battling for as far back as whenever Fox News decided to make it up.

Donald Trump understands his base is a bunch of gibbering idiots who boycott Starbucks for having Christmas cups that don’t read “Jesus Is Lord,” and he panders to them frequently about the “Merry Christmas” issue. But now he’s expanding his repertoire.

At his campaign rally in Florida, on Tuesday night, Trump declared that some people had declared war on the word Thanksgiving.

He started by saying he’d fixed the Merry Christmas problem, to applause, before spreading fear again, claiming there were threats against Thanksgiving now to contend with.

“But now we’re going to have to do a little work on Thanksgiving,” he blurted. “People have different ideas why it shouldn’t be called Thanksgiving, but everybody in this room I know loves the name Thanksgiving and we’re not changing it.”

The war on Christmas is over.
Long live the war on Thanksgiving. pic.twitter.com/kzXnIcVBbm

Can you imagine cheering this nonsense?

According to the HuffPost, Trump regularly mentions Merry Christmas and how he has “brought it back” even though it’s never gone away. He’s made it a talking point in May this year, July last year and in October and July the year before. A strange pattern that doesn’t even seem to have much to do with the holiday, which is consistent with how Trump usually thinks.

People do criticize Thanksgiving as a holiday that essentially celebrates the eventual genocide of native people in the U.S., but that criticism is longstanding and isn’t part of any new movement to change what the holiday is called. Of everything the history of the day represents, giving thanks might be the least offensive.

There was apparently a story circulating in 2015 that alleged President Barack Obama wanted to change the name, but it was debunked by Snopes. That didn’t stop conservative media from circulating it, of course, because it’s the perfect thing for their viewers to be mad about, instead of how Republicans are holding back affordable healthcare.

At least Trump has given us one thing: an excuse to make jokes about how stupid this idea is.

Wait, what do we want to call Thanksgiving, then?#whatliberalscallthanksgiving https://t.co/Eewyok3nEc

How do we prepare for the "War on Thanksgiving?" I don't know what to wear.

We have won the war on Christmas, we are onto Thanksgiving. Watch out Easter- you’re next. Don’t say liberals don’t do battle. https://t.co/A3Vg4wgfYf

Wait. So Trump is now saying liberals are waging a War on Thanksgiving as well as the long-running War on Christmas?

OK, which one of you guys leaked the new plans for oppressing conservatives by destroying everything they hold dear?

Trump opens his rally by claiming that there's a war on Thanksgiving. “People have different ideas why it shouldn’t be called Thanksgiving," he says. Um, do they?

And for that we are truly thankful.