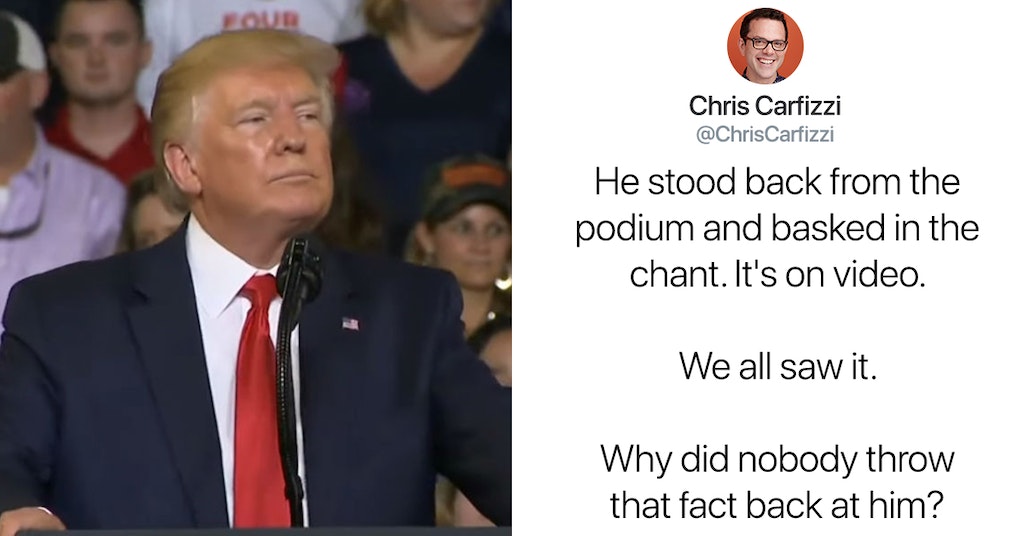 Is there a point at which people will become over-gaslighted and snap? Donald Trump is pushing that right up to the edge with his latest blatant lie in which he claimed he tried to stop the “send her back” chant at his latest ego rally by quickly speaking over it when everyone in the world has seen the video of him standing there and letting it happen.

REPORTER: Why didn't you ask your fans to stop chanting "send her back"?

TRUMP: "Number one, I think I did. I started speaking very quickly."

(This is brazen gaslighting & damage control. Trump basked in the chants & took his time resuming his speech.) pic.twitter.com/EMBkHQwQuv

In the Oval Office interview, Trump claimed he was “not happy about” his supporters spouting the disturbingly racist chant demanding that a U.S. citizen and congresswoman be stripped of her citizenship and sent back to the country she fled many years ago as a refugee. This struck many people as odd considering the fact that the video of the event shows him standing there, basking in the attention, for several long seconds before finally resuming his speech without being like “hey maybe don’t do that.”

Trump claims he tried to shut down the “send her back” chants — which just echoed the messages of his tweets and remarks in recent days. That is a lie. It’s on video. For 13 seconds, he just basked in the chant. pic.twitter.com/RB4kKMFTAo

It’s also a confusing thing for Trump to say considering the fact that they likely chanted what they chanted because Trump tweeted that congresswomen like Ilhan Omar should “go back” to where they came from. He also suggested during the rally that anyone who has any criticisms of him, the U.S. government, or the country in general should just leave.

Based on the responses to this latest Trump lie, it seems that people are about at their limit in terms of blatant gaslighting. Here are the most tired tweets on the subject:

NOT ONLY A LONG PAUSE BUT A PROUD, BASKING IN IT PAUSE. HIS FACE DID NOT LOOK SURPRISED AND HE DID NOT TRY TO STOP IT IN ANY WAY. WHY DOES ALL WRITING ABOUT HIM HAVE THE SOFTNESS OF A LIMP DICK https://t.co/frRGMIN7r1

He went silent for more than 13 seconds to let the chants proceed, then kept attacking Omar without rejecting the chants in any way. https://t.co/VLnXWTr6tQ

HERE IS WHAT HAPPENED:

– Crowd starts chanting, "Send her back!"

– Trump lies, says he tried to stop the chant pic.twitter.com/MlMDyjvtOM

"I started speaking very quickly" is the kind of ridiculous excuse my young daughter might use, and she hasn't been allowed to run a country in ages. https://t.co/wyYUAAoZH6

Good thing almost every single Republican didn’t defend his actions before this. That would really make them look bad.

This is a lie. He could have stopped the chant instead of waiting for it to build if he thought it was wrong. He could have stood tall like John McCain. He didn’t. He never does because it’s not who he is. https://t.co/b12AmTaCGH

“The party told you to reject the evidence of your eyes and ears. It was their final, most essential command.”

Remember when they pretended to only be against illegal immigration? That morphed into US citizens and US congresswomen rather quickly! https://t.co/TmlM8Ahy36

How can everyone NOT SEE WHAT A LIAR HE IS? HE ISN’T EVEN CLEVER OR GOOD AT IT.

I disagree with the chants I started and led https://t.co/i3KzCiyjXG

If Trump would like an example of how you shut down this filth he only needs to look back at John Mcain’s defence of Barack Obama. When told by a supporter Obama was he was a suspect Arab, McCain said “no ma’am” Obama is “a decent man” that “I happen to have disagreements with” https://t.co/ph5G6uCESz

jfc how do reporters stand this fuckin gaslighting every day without just walking out https://t.co/Un9667fTP9

If the goal of gaslighting is to make someone go insane, then at least Trump’s doing one thing right.