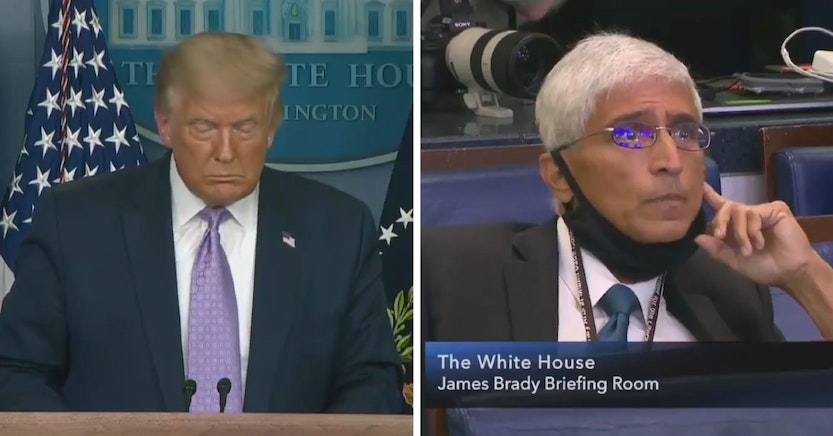 During a press briefing on Thursday, HuffPost reporter Shirish Dáte took a shot and asked Donald Trump if he has any regrets about the thousands of lies he’s told over the course of his presidency. The question seemed to confuse Trump at first, then once he finally understood what was being asked, he simply ignored the question and moved on to someone else.

“Mr. President, after three-and-a-half years, do you regret at all, all the lying you’ve done to the American people? On everything?” Dáte asks.

“All the what?” says Trump.

“All the lying,” says Dáte. “All the dishonesties.”

“And who is that?” asks Trump.

“You have done,” says Dáte. “Tens of thousands…”

Finally seeming to understand that he’s being asked a tough question, Trump immediately calls on another reporter, who asks about the payroll tax.

Dáte later seemed to reference this question in a tweet, saying that he’d been wanting to ask Trump “that” for five years.

According to The Washington Post’s fact-checking database, Trump has indeed lied over 20,000 times during the course of his presidency, averaging 12 lies per day. The number of misleading or outright false claims uttered by Trump has increased during the coronavirus pandemic. Among his most popular lies are that the U.S. economy is currently the best it’s ever been and that his border wall is being built.

After three and a half years of this, Trump critics were happy to see a reporter finally confronting him over the lies, even if the president ultimately ignored it.