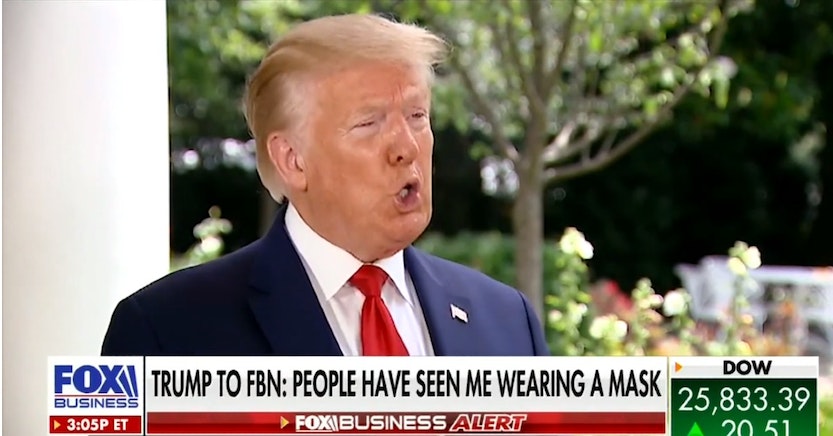 As the coronavirus pandemic continues re-surging across the U.S., particularly affecting some states more favorable to Trump, he’s suddenly changing his tune on wearing masks.

Now President Trump says he’s “all for masks” and claimed to look like the Lone Ranger at some point in which he was allegedly wearing one. (The Lone Ranger famously wore a mask over his eyes, not his mouth.)

After resisting wearing a mask in public, President Trump now says he thinks it makes him look like the Lone Ranger - and he likes it.https://t.co/LwzGXP5aqG

This, of course, was all said during an interview with Fox News.

“I’m all for masks. I think masks are good,” Trump said. “People have seen me wearing one.”

“I had a mask on. I sort of liked the way I looked. OK. I thought it was OK. It was a dark black mask, and I thought it looked OK. Looked like the Lone Ranger. I have no problem with that, and if people feel good about it, they should do it.”

Trump had previously declined to wear masks on multiple occasions, including while touring a mask-making factory. Now, however, more Republicans are starting to promote masks and some have begun urging Trump to wear one publicly to set a good example for the nation.

Democrats had been urging Trump to set an example for months but were ignored or ridiculed.

While it’s a good thing for the president to (finally) promote and possibly even follow the advice of public health experts during a pandemic, he also repeated his assertion that the virus is just going to magically disappear one day.

“I think we are going to be very good with the coronavirus,” he said. “I think that, at some point, that’s going to sort of just disappear, I hope.”

In reality, the novel coronavirus will stick around until we have a proper vaccine that can be administered to the vast majority of the population. Of course, people will have to be willing to get a vaccine for that to work.

Rather than think about how we’re all doomed, enjoy these Lone Ranger jokes:

Trump said that when he wore a Coronavirus mask, he looked like the Lone Ranger.

The Lone Ranger wore a hat and a mask around his eyes.

Trump is pathologically incapable of being correct. pic.twitter.com/hzrlXC0IvX

Trump finally wore a mask the other day & said he felt like the #LoneRanger. But the Lone Ranger's mask had two eye holes in it, while Trump's mask had only one asshole in it.

This is the Lone Ranger.

So, if Trump is The Lone Ranger, is this Tonto? 😳 pic.twitter.com/PbFTLTxa0h