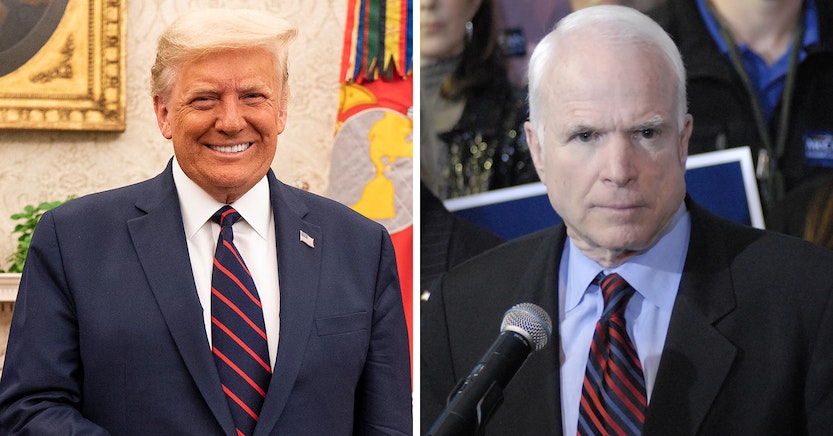 There’s always a tweet. On Thursday evening, President Donald Trump denied having ever called Sen. John McCain a “loser” despite having previously tweeted out a news article that said exactly that.

According to The Atlantic, several unnamed sources said that Trump made negative remarks about US service members—including those who died in battle—back in 2018 when he declined to go to the Aisne-Marne American Cemetery in France.

“Why should I go to that cemetery? It’s filled with losers,” the President allegedly said. He also referred to Marines who lost their lives during the World War I battle as “suckers.” Sources from the Department of Defense say that Trump called John MacCain, a decorated war hero, a “f–king loser.” Trump also allegedly said that President George H.W. Bush was a “loser” for being shot down in battle.

Donald Trump received a deferral because of bone spurs in his feet and never saw any action or served.

Trump and his senior officials tried to tell the American people that their lying eyes were deceiving them again, that everyone except him was lying about the disparaging comments. But we’ve got the receipts!

Calling the story “fake news” and saying that he would “swear on whatever, or whoever, I was asked to swear on, that I never called our great fallen soldiers anything other than heroes,” Trump said that the whole thing was “made up…by disgusting & jealous failures in a disgraceful attempt to influence the 2020 Election!”

People were not impressed, taking to social media to call out the President.

Elizabeth Warren and Bernie Sanders both slammed the President for his disrespect: “President Trump disgraces the title of commander in chief each day he is in office,” Warren tweeted. “This is shocking, even for Trump,” Sanders agreed.

The hashtag #TrumpHatesVeterans has begun to make the rounds as well, and some veterans and family members of veterans are posting pictures of themselves in uniform.